"What do they think they’re doing?" I thought, clutching my coffee one morning last October as I heard the latest news from Congress. Our lovely senators and representatives had just given the President permission to use force against Saddam Hussein. "Omigod, we’re going to war." This second thought hit me like a cluster bomb, gradually and with lasting effects.

I had heard President Bush’s reasons for waging war and it all sounded insane. There was no evidence of the weapons of mass destruction he claimed the Iraqis had. There was no reason to think that getting rid of Hussein would bring stability to the troubled Middle East. If the U.S. went around lashing out at every country where there’s an imagined threat, we were on our way to global destruction. I thought about the American soldiers and Iraqi people who were going to lose their lives, and I was enraged.

That October morning was the beginning of my major activism. I sent angry e-mails to California senators Barbara Boxer and Dianne Feinstein, but that wasn’t enough. I wanted to do something big, take my outrage and make it positive.

Three days later, when my rabbi invited me to "check out" a new peace vigil at 3rd and Fairfax, I was eager to go. I left Long Beach with the clergyman and we arrived at the corner in time to catch the last 10 minutes of the demonstration. When we drove past that corner, I heard the cheers of the protestors mingling with the honks of passing cars. I read signs that said "War is Not the Answer" and "Fear Breeds Terrorism." My dream, it seemed, had been realized. I was no longer an isolated liberal writing powerless letters to my representatives in a conservative nation; I was part of a movement. After parking, we had dinner with the remaining protesters. It was there that I met my first genuine peaceniks, a group which welcomed me with open arms. One man in particular with a shaggy beard and a tie-dyed T-shirt was thrilled to see a young face. "I was about your age when I got involved in politics," he said. "Keep questioning. Don’t ever listen to your parents."

I brought my parents and my younger brother along the next week, and the week after that, and the week after that. It became a family ritual, like families on TV have Sunday dinner or Tuesday game night. We had the Saturday night vigil. The vigil was 10-15 people at first, and grew to be 20-25 people. At its peak, 3rd and Fairfax probably got about 50-60 protestors. Many came in groups from their churches, synagogues, mosques and temples. At first, the response was overwhelmingly positive. There were some angry onlookers. Mostly we got honks and peace signs from passing cars, and a few people even pulled over and joined us. My fellow protestors were always excited to see a teenager. They had almost all come of age in the anti-war movement of the 60s and saw me as a link to the next generation of activists. Margaret, a nurse who served in Vietnam and long-time peacenik, always asked, "How’s it going at school? Are you organizing?"

By November I had developed a new routine. I would wake up, have my daily cup of coffee and listen to Amy Goodman’s "War and Peace Report" on KPFK. Then I would listen to National Public Radio, which is a little more mainstream, on the way to school. This got me good and angry for a school day of mouthing off. I started a club called United We Sit. Its mission was, "to encourage political awareness and activism in the voters of the near future." The meetings were made up of four or five friends whom I had begged to come. We sat on the cement outside our advisor’s room because even our sponsor didn’t think it was worth his while. We managed to have two forums: one on Iraq in November and one on civil liberties in March which turned into an argument about Iraq. We had a decent turnout, thanks to extra credit offered by several teachers. We also published two issues of a newspaper, Politika, as an alternative to the school’s official, and completely biased, newspaper.

My classmates didn’t seem to care

All of our activities had an impact, but not really the one I had in mind. I often heard comments like, "Hey, hippie! What are you gonna do when Saddam’s nukes are falling?" and "You know the government is going to ship you out to Cuba with the rest of the terrorists." Some were joking, some weren’t. One of my best friends called me "completely blind and deaf" in an article called "Earth to Protestors" which I published for the sake of a differing opinion. He said Hussein had nukes and was going to kill us all. But another girl shyly asked me for info about upcoming protests. I embraced my new reputation. I always had a few flyers in my backpack, wore flowers and scarves in my hair and walked around campus singing random protest songs.

My new activist friends were counting on me to organize some youth, but it wasn’t going well. My classmates were willing to encourage or condemn me, but they wouldn’t get involved themselves. At one point, I sold buttons that said "bullsh**," with "bush" highlighted. They sold like hotcakes, but students seemed more interested in the buttons’ obscenity than their message.

I was frustrated by the lack of response at my school. I saw something wonderful in the peace movement. It was a place where I felt appreciated and no one talked down to me because of my age. I wanted to share that with my classmates, but they couldn’t care less. This didn’t surprise me; in fact I expected it. I’ve met very few people my own age who are interested in politics. Teens just don’t see how it affects them. Even seeing their teacher fired because of budget cuts or their brother go off to war doesn’t motivate them to leave the mall or the multiplex or the Internet café.

My activism also got me into trouble. One morning, my guidance counselor called me out of chemistry. Here we go again, I thought. "My brother is in Kuwait," she said, "and I read the announcement you put in the bulletin." She told me, with a red face and a furrowed brow, that what I was doing was wrong and that I should support the troops. We were having a forum about the Patriot Act and civil liberties (the right to privacy, personal expression, religion, etc.) and my announcement read, "Come exercise your right to free speech while you still have it." I bit my tongue as she said, "It’s not OK to criticize something the government is doing while people are dying for you!" I remembered a report I had done on the Espionage Act of 1917, under which people were jailed for years for giving speeches and handing out leaflets. She had, in her blind patriotism, completely denied what I thought America was all about: freedom. I wanted to tell her that the troops were dying for Bush and his ideas, not for me. Instead, I mumbled an insincere apology and shuffled sheepishly back into class. Feeling pretty helpless, I submitted a new and completely inoffensive announcement. The next day, however, both announcements were read and I laughed triumphantly. It was a tiny victory in a school where I had experienced little political success.

In February, the "big protest month," I felt like I was going to a series of parties. The larger protests were marked by great music, creative signs and occasionally, people taking off their clothes. At a women’s protest in Westwood, a group of five women distracted the press and some of the crowd by stripping on the federal building lawn. I went over to see what was going on, accompanied by my 12-year-old brother. Seeing the women outfitted in flowing white garments and hearing the words, "First our secretary will be undressing, followed by our treasurer…" I turned around, pulling my brother along by the wrist across the slushy lawn. He was literally kicking and screaming, "I go to all these protests and I don’t even get to see any naked women!"

However, once the war officially began in March, the mood became more somber. At a protest at the Westwood Federal building the day after the war started, we were sandwiched between the Los Angeles Police Department on the lawn and the L.A. County Sheriffs in the street. Both were threatening us with rubber bullet guns and tear gas. A guy with a bullhorn was shouting, "We’ve been tear-gassed before! We’ve taken rubber bullets before! We don’t care!" The crowd was pushed back with nightsticks and we struggled to keep our footing. UCLA students were throwing themselves into the street in "die-ins," only to be arrested by the sheriffs. Seeing my brother’s tiny frame facing off an armed cop twice his size was an image I’ll never forget. That was the only time I felt afraid, for myself and for my family. At the end of the night, passing the final policeman in the row, I muttered, "Thanks for doing your job" and he surprised me by responding, "Thanks for doing yours."

We still stood on 3rd and Fairfax, holding our now weather-worn signs, but the supportive honks and peace signs were no longer accompanied by smiles. Instead, we got grim looks that said, "It’s pretty hopeless, brother, but they can’t say you didn’t try." We were screamed at more by passing drivers. Once people were dying, it became even more unpatriotic to question the reasons. As we saw it, we were supporting the troops by trying to bring them home, but military families don’t want to hear that their heroes are victims.

After the war, it got uglier

Critics gave us the finger, which my father ironically dubbed the "half-peace-sign." Their angry slogans were usually so profane and off-topic that we didn’t pay much notice. We were called communists, anarchists and my favorite, "f***ing tree-huggers!" I and my fellow radical, pinko, hippie, leftist, subversive, anti-authority, bleeding-heart liberals mostly just laughed them off. Nothing pisses off a heckler more than a peace sign and a smile.

The Saturday after Bush announced the "end of major combat" in Iraq, my family and I weren’t quite sure what to do, so we went to the corner anyway. The core group was still there. We held a meeting and agreed that we wanted to stay active and that our presence in the community would still be valuable. During the official war, we had served as encouragement to those who thought they were alone in their beliefs, and we wanted to continue with that work. People are still dying and we may be feeling the effects of this war for decades to come, but that’s not quite catchy enough to put on a sign, so we decided to focus on voter registration to get Bush out of office. We are still a progressive voice in the community. We get out our message about the war, the Patriot act and other issues, and we register a few voters each week. My friends think I’m wasting more time than ever, but I don’t see it that way. I walk away every week with a positive feeling. With the governor’s recall, we’ve had a bit of resurgence in the rush to register voters. Because of the now tiny group at 3rd and Fairfax, there are a few more voters, informed citizens and signatures on various petitions. I will be there this week, and the week after that, and the week after that. 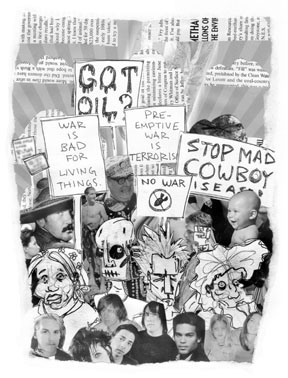