It was Sunday, Dec. 13, when I saw “R.I.P.” as my friend’s status message on Instant Messenger. I asked him what happened. He said the day before, a senior at my school named Aydin Salek died of a possible alcohol overdose. At first I didn’t believe it. “Don’t lie,” I said. I was surprised. I had never known anyone my age who had died. It didn’t seem real.

I tried to concentrate on my math homework but I couldn’t stop thinking about his death. I didn’t know Aydin personally but I knew who he was. I had seen him laughing with his friends just two days before at the school play. I just couldn’t believe it. I mean, he was one of the student leaders at my school, a writer for the school newspaper, president of the American Cancer Society club and my school’s commissioner of Internal Affairs, who serves as the student representative on the school board. I remember watching his speech for election last year. He made the speech fun and at the end people cheered for him. He seemed like a smart person with confidence; he still had a lot to do and achieve.

The part that upset me the most was that someone who had a lot of potential was gone because of alcohol. As I was talking with my friends about his death, I found out that he died after attending a party where teens were drinking. I knew alcohol was dangerous but I didn’t know that one night of drinking could result in death. It reminded me how I should be careful when making decisions in my life—big or small. 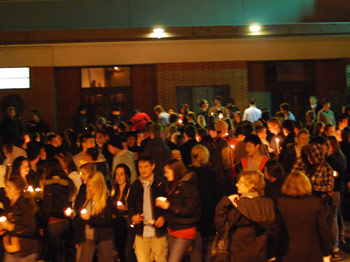 Students gathered for a memorial walk from South Pasadena High School to Aydin Salek’s home a few days after he died.


The next day, it was a lot different at school. Instead of people loudly talking with their friends before class it was very quiet. The school let students leave their classes to talk to counselors. There was a memorial set up on the main quad where people could write messages to him. His close friends stayed there the whole day. I could see people talking, crying and hugging each other. I could tell how good a friend he was. Watching Aydin’s friends crying made me wonder what my life would be like if someone who I love was gone. I couldn’t imagine my life without my family and my best friends. Thinking about it made me appreciate that I have family and friends I love, and that they’re healthy.

Aydin was outgoing and passionate

People kept talking about him to keep his memory alive. “You always heard him before you saw him,” sophomore Katherine Morales, who was a close friend of his, told me. “Everyone loved him. He was outspoken, energetic and very passionate.” People wanted to do things in his honor and to remember him. They gathered at the school on Wednesday evening, Dec. 16, and walked to his house holding candles. The school newspaper published a special memorial issue for him that came out at the end of that week. I thought it was nice of them to do that.

Now I don’t think about his death as much as I did before because I’m busy with schoolwork. But once in a while when I do, I feel thankful to Aydin because he changed my view toward death. I was  scared of death before. Dying seemed like losing a connection with people here on Earth. But his death showed me that I was wrong. He died but a lot of people still remembered him. When you die, your body may leave but your soul doesn’t; your soul stays in people’s hearts. I’m not afraid of death anymore. What I’m afraid of is dying before I live a full life. I want to go to my dream school, study genetics and travel the world. Aydin’s death reminded me that life can be short so I should live my best every day.


Click here to read Michelle Ruan’s story. Michelle knew Aydin from a youth program they were both a part of. She felt sad when he died but wasn’t sure how to grieve for him since they weren’t close.