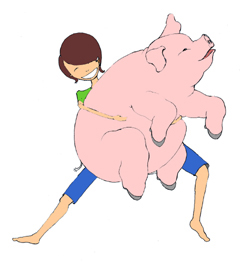 After being a vegetarian for nearly two years, I’m still defending myself. I am branded "the radical tree-hugging, tofu-eating freak," instead of the more desired "compassionate, cruelty-free eating" person.

I don’t think I’m a freak for caring about animals. The freakish thing is that our whole food industry is built on the pain and suffering of defenseless creatures, and no one thinks twice about it. Most people just chomp down their hamburgers without even wondering where their food came from.

I never really knew what it meant to be a vegetarian or vegan until the summer of ninth grade. I met a friend who was vegan, someone who doesn’t eat foods that come from animals like milk, eggs or cheese or use products made with any leather or wool. She told me about factory farms, where chickens are crammed into cages without enough space to turn around or even spread a wing. I began to think about animal rights and the foods I ate, but there was no way I could go vegetarian. Chicken strips tasted too good. Yet, I still had an instinct that something was wrong.

The next summer I became a vegetarian while at debate camp. One day an instructor invited everyone to a vegan brunch. I thought, "Free food. Yum!" But I was also surprised to see so many vegans, vegetarians and interested campers like me. Most of them were high school students who talked about why they were vegetarians and vegans. One put it best when she said, "It’s wrong to eat a pet dog; I don’t see how it is much better to eat any other animal."

That made so much sense to me. After the brunch was over, my instructor asked whether anyone wanted to watch a documentary about slaughterhouses. Seeing a cow that is still conscious hanging from its foot while getting slaughtered made my body ache. That’s when I decided to stop eating meat. I figured if I could give up meat, perhaps fewer animals would have to suffer.

When I returned home from camp, I apprehensively told my parents I had decided to become a vegetarian. My parents thought I was crazy, while my siblings thought it was a joke. After telling them that I didn’t want to consume anything that caused animal suffering, they knew I was serious. But giving up meat and other animal products was almost impossible. I never knew that even the simplest foods like chips have animal ingredients like whey (which comes from milk) in them. So I started off by not eating any meat.

This made it easier for my mom, who cooked our family’s meals. She substituted the meat with tofu for me and bought lots of soy milk to ensure that I received the proper nutrients. Now we make frequent trips to health food stores like Wild Oats and Whole Foods.

Vegetarianism began to fit into my life

School was another problem because every entrée had meat. But then a friend complained to the school district and a week or so later we got vegetarian foods, like bean burritos and veggie burgers instead of just the plain tasteless salads.

Eventually, my family and friends accepted my so-called "weird" eating habits. During the next few months I learned more about animal rights, even signing up for several online newsletters. In September 2004, I received an e-mail about a national animal rights conference called Liberation Now. This would be my chance to really understand what it meant for me to be a vegetarian and how to explain to others where their food came from and how the animals suffered.

But I was also a little nervous. How would I explain to my parents that I wanted to go to Berkeley to attend an animal rights conference? My family already thought I was bizarre for not eating meat, which they said has "great taste" and "nutritional value." Going to a conference "for the animals" would only reinforce my strangeness in their eyes.

I had trouble telling people what I would be doing during the conference. Friends and family would say, "What are you doing this weekend?"

"But animals don’t have rights!"

After hearing this over and over I began to think about the "ridiculousness" of an animal rights conference. Yet, I realized that while animals may not have "rights" that the human race created, it is unfair to slaughter them as a commodity.

After receiving a travel grant and convincing my parents that the trip would give me a feel for college life, I was set.

When I first arrived at the conference, I was a little intimidated. There were vegans who had been animal rights activists for much of their lives. I had only been a vegetarian for a little more than a year. Converting to veganism and giving up everything that had any animal products in it had crossed my mind. But it’s a lot more hardcore than vegetarianism because foods that you would never expect are derived from animals, like chewing gum. I tried to read food labels more closely but it was annoying to constantly check everything I ate. Even when I tried to stick with vegan options, I noticed they didn’t taste as good while they cost so much more.

So, I felt hypocritical saying I opposed animal cruelty while I wore leather and ate foods that contained milk. During milk production cows are artificially impregnated and hooked to machines to produce 10 times more milk than natural. But most of the vegans were encouraging and even shared some of their favorite recipes. They didn’t judge or criticize me.

The conference speakers included John Robbins, author of Diet for a New America. Robbins is the only son of the founder of the Baskin-Robbins ice-cream chain. He was expected to lead the wealthy empire, but instead he chose to walk away from its profits. It was inspiring to know that Robbins followed his heart even if it meant giving up a life filled with money and free ice cream. Instead, he founded EarthSave International, an organization dedicated to healthy food choices and the preservation of the environment. He is also the board chairman of Youth For Environmental Sanity (YES!), which educates and empowers youth to protect all life on Earth, including animal life.

Another speaker who inspired me was Ingrid Newkirk, cofounder and president of People for the Ethical Treatment of Animals (PETA). Whenever I handed out literature at school about animal cruelty, a lot of people, even my friends, would automatically reject it because it came from PETA. PETA is the largest, most well-known animal rights organization. Some criticize PETA for its "outrageous" and "extremist" acts like nudists protesting fur. But PETA stands up for those who can’t speak for themselves, even if it means taking risks. Ingrid Newkirk taught me that it’s OK to stand up for what you believe in and more importantly, that every person makes a difference.

The speaker that I looked forward to most was Carol Adams, activist and author of The Sexual Politics of Meat. She made me realize that being a vegetarian encourages people to fight other forms of oppression. She talked about "seeing the same things differently." It’s easy to forget you’re eating an animal when eating "meat" because we don’t call our meals "cow" and "pig" but rather "beef" and "pork." It is almost impossible to think of eating a once-living being when consuming "sausage" or "burger."

She also discussed how racism, sexism, homophobia, animal cruelty and other forms of subjugation overlap each other. For example, women are exploited for the sake of meat advertisement. In ads, women’s body parts, particularly legs and breasts, are emphasized. I’ve even seen a beach towel with a picture of a woman’s body divided into butcher cuts like "loin," "ribs" and "rump." A question asks "What’s your cut?"

The speakers were magnetic but I connected with the other students the most. They were mostly high school and college students from California, Utah, Florida, Tennessee and even Canada. We shared our stories of telling our parents about our conversion to vegetarianism.

It was comforting to know that my parents weren’t the only ones who thought their child had gone crazy. We also shared our stories of people asking questions like "Don’t plants have feelings too?" and "If you were driving a car and had to kill a baby or a dog, which would you choose?" None of these questions get to the heart of vegetarianism—working to end cruelty to animals.

Perhaps my most memorable conference experience was Saturday night in downtown San Francisco when we staged an anti-fur protest in front of Neiman Marcus. There was a lot of emotion as groups of activists huddled together. People dressed in big jackets and scarves had their cameras, posters and leaflets all ready. It was scary. I was afraid that people walking by would verbally attack us. As I stood there a tear ran down my face. I was mad at the world. How could we abuse animals like this? Along with more than 50 passionate and determined activists, I was standing and chanting: "60 dead animals, one fur coat!" and "No more cages, no more traps, no more fur on Neiman’s racks!" I’ve never felt so empowered in my life.

Our dependence on animal exploitation hit me when I got back to my normal life. For my physics class, I was instructed to build an egg catcher with two pieces of paper and a strip of tape. The objective of the lab was to construct a catcher strong enough so that when an egg fell it wouldn’t crack. My physics teacher said that if anyone had a problem using eggs he would provide a plastic egg.

I didn’t want to use a chicken egg because chickens’ beaks are severed with hot blades so that they don’t peck each other when they are crammed into cages. And when hens are done laying eggs, they are forced to starve to shock their bodies into another laying cycle.

Laughing at the excitement of watching eggs crack was pointless to me. I was baffled when my teacher said this lab was "just for fun."

Since becoming a vegetarian I feel healthier and stronger as a person. The conference taught me how to better communicate with others about animal rights. So when friends call me a "tree-hugging tofu freak" I just laugh and think about the progress that has been made to reduce animal suffering. My objective is not to convert others into being vegetarians or vegans but rather to have them see that the human race is not the only species that deserves consideration.


To find out more about animal rights

www.veganoutreach.org
Advocacy group dedicated to educating the public about animal cruelty and promoting veganism. Check out the site to order copies of booklets, donate money, sign up for e-mail newsletters and request a free Vegan Starter Pack.

www.peta2.com
This is PETA’s (People for the Ethical Treatment of Animals) youth-oriented Web site. You can sign up for the street team and get free stickers, DVDs and information on helping animals.

Animal Liberation by Peter Singer
One of the first and best animal advocacy books—Singer delves into the world of animal exploitation and seeks to end prejudice and unjustifiable discrimination against animals through questions of ethics.

The Sexual Politics of Meat by Carol Adams
Adams explains that the subjection of women falls under a similar pattern to that of animals because we live in a male-dominated and meat-eating society. Yet, her analysis only strengthens as she interconnects the oppressions of sexism, racism and speciesism.