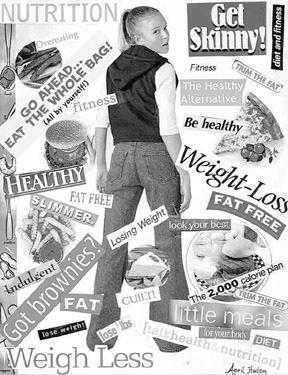 In school, I had a crush on this one guy. He was really hot, and I wanted him to like me. So I stooped to the level of buying him a $35 gift certificate to Niketown for his birthday with money I had saved. At lunch on his birthday, I handed him the gift certificate. I was so nervous to do it, but at the same time excited, because I hoped this would make him like me. He took the envelope and was like, "Whatever." It was horribly depressing. I still had a crush on him, but knew he’d never like me back. Still, I wanted him to think I was cool.

One day during gym class my friends told me that the hot guy had called me, "Shamu," like the whale. Those words stung. I got really depressed. The feeling was unbearable. I tried to keep the tears back. But later on that day, I locked myself in the bathroom and hot tears flowed down my cheeks. I didn’t want him to think of me like that.

Until that point, I had never considered myself fat or even thought twice about my weight. I had good friends and was happy. People considered me smart. Weight wasn’t even an issue with me until then.

I wanted to prove that guy wrong and make him see that I was pretty and skinny. My first reaction was to starve myself. And I did. The next day I stopped eating altogether. It was tricky to not let my parents find out, since we ate dinner together. But I made excuses. I told them that I didn’t feel well, or that I wasn’t hungry. I’d sit at the table, pick at my food and wouldn’t eat much. Maybe a pea. Other times, I hid my food in a napkin and threw it away later.

After a week, I hopped on the scale hoping that I lost at least a couple pounds. I lost only two pounds. I was disappointed, because I imagined an easy 10 pounds were gone. So I stopped starving myself since it wasn’t working. I got discouraged and was like, "Whatever." I told my friends that I stopped eating, and they were worried. They said not to do it for guys, because they’re not worth it. "It’s just baby fat and will fall off," my friends said. I felt better, but things still weren’t all that great.

For the next two years, I yo-yo dieted. I went through phases where I ran on my parent’s treadmill for hours. I did hundreds of sit ups each day and went to the gym. I tried different diets like eating nothing but soup. Or I’d eat nothing but green vegetables. Or only a specific number of calories, but juggling all those numbers got confusing.

The numbers on the scale went up.

There was never any drastic loss or distinct change in my body. I was frustrated and didn’t know what to do.

I changed my whole way of eating

One day I was in a chorus for the opening of Save Ferris. We performed outside under the sweltering sun. I didn’t feel well. My throat was killing me. My mom was friends with Jan, the mother of another choir kid. Jan also happened to be a homeopathic doctor.

When I told my mom about my throat, she asked Jan about it and then told her about my problem losing weight. Jan checked me out and concluded that I was allergic to sugar, dairy and yeast. She said yeast grew up the back of my throat and made it hurt. She also said yeast fed off sugar in my body and the reaction made more yeast grow. That combination made it difficult to lose weight. She told me to stop eating anything with those ingredients and gave me a bunch of pills to put under my tongue that destroyed yeast.

I had to completely give up anything containing yeast, dairy or sugar. That meant no bread, cake, candy or ice cream. I couldn’t even drink a glass of milk. Without those foods in my life, I had to change my eating habits and live on a new diet. I waited until summer to start the diet because I didn’t have that much self-control at school, where sugary foods were everywhere.

So after school ended that year, I started the diet. The food I bought was more expensive because it was special "no sugar added" or "dairy free" food. I shopped at special stores like Whole Foods, Erehwon and Trader Joe’s. I ate eggs for breakfast. For lunch I had salads, soups or yeast-free sandwiches. Dinner was usually rice pasta or chicken.

The diet didn’t seem to work at first. I wanted to see immediate results, but the numbers on the scale didn’t budge. Just starting the diet was extremely hard. Learning how to exercise my self-control was tricky. Chocolate bars practically called out to me. I wanted to eat normal sandwiches again, not the gross yeast-free kind, that taste like cardboard.

But by the end of the summer it all paid off. I lost 25 pounds and weighed 115. I also grew three inches taller. When I went shopping for the new school year I was so excited to find that I went from size 13 pants to size 5! It was the greatest feeling in the whole world!

When I returned to school, I was excited to show off the new me. But when I walked into class, nobody said anything. I asked one friend if it looked like I changed over the summer. He looked at me and said, "I don’t remember what you looked like last year." I was so depressed, but at least I didn’t feel self-conscious about my weight anymore. Maybe people didn’t notice that I lost weight, but at least people weren’t teasing me about being fat.

I feel better being thin

The pressure is still on to look good, even if I don’t really care what other people think. It’s not that I’m trying to look good for them, it’s just that I feel more confident when I look good and healthy. After three years I still stick to my homeopathic diet. Sometimes it’s really difficult, like when they sell Krispy Kremes during nutrition right in front of my classroom. But I have learned to maintain my control.

I think my life is different, because I’m thin. I don’t care what I look like at school. I never wear special clothes, never put on makeup unless in dire need and rarely fix my hair. If I was heavy, my looks would probably concern me more. But I’m comfortable with how I look.

Last April, I went to visit my half sister in New York. About two weeks before the trip, I got on the scale and was up a few pounds. I felt so disappointed, because I wanted to look good in New York. On my last visit, we hung out with some really cute guys who I’d see again during my upcoming trip. There was one in particular whom I wanted to impress. I decided to lose as much weight as possible before my trip.

I asked people at school how to lose weight fast. Some suggested that I smoke cigarettes, because they kill your appetite. I’d rather be fat than die of lung cancer, so I opted for a strict diet instead. Every day I had an orange for breakfast, never ate lunch and tried to skip dinner. If I had to eat supper, I ate chicken or something small and light. I also compulsively exercised. I went to a fitness club and ran really hard during gym class. I did sit ups in my room for a half hour and worked out doing other yoga and fitness stretches for at least another 30 minutes. I lost 10 pounds and got a really firm stomach. I was so happy with how I looked.

When I finally got to New York, people said that I looked good. But I didn’t get to see the guy I crash dieted for. Oh well.

While in New York, I didn’t watch my weight at all and let myself splurge. My sister took me to Serendipity’s, a restaurant famous for amazing frozen hot chocolates. We ate out all the time. When I came back to L.A., I jumped on the scale. I had gained 15 pounds.

Sometimes my eating still gets crazy

I still go through phases of eating a lot and then the opposite by scrutinizing everything that I put in my mouth. My eating habits basically revolve around stress. When I am really stressed I don’t stop eating, or I go to the other extreme when I’m studying so hard that I never take a break to eat.

During a recent week of finals at school, I was so stressed that food seemed to be my only consolation. Practically every five seconds I found myself wandering back into the kitchen to put something else in my mouth. My dad bought me sugar-free blueberry muffins to snack on. Sugar-free does not mean fat-free though. I ate one after another because they were easy to eat. In an hour I gobbled up three of the six, which totaled 900 calories.

When important events are coming up, I watch what I eat. If I’m not careful, I’ll go back to being unhappy with the way I look. But the rest of the time, I just try to maintain a happy medium.