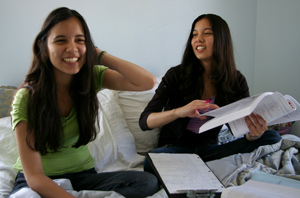 Helen (left) and Nidia always study together in Helen’s room.

Being a twin isn’t as fun as it looks, but I wouldn’t have it any other way. My sister, Nidia, and I are always being compared, confused and asked silly questions like, “Who’s the evil one?” and “If I hit you, could she feel it?” Lots of people see being a twin as being so lucky since I always have someone to talk to and I never get lonely.

But there’s a down side to being a twin too. In a way we’ve meshed into one person. We look, speak and think alike. We finish each other’s sentences. Sometimes when we tell a story, we alternate telling it between pauses. We also speak at the same time, like we’re one person. When people say “hi” to us, we say “hi” back at the same time and it’s weird even to us. We both like to draw, we like the same TV shows, movies and food, and we share almost everything. We have similar habits like grinding our teeth and we cry when we see the other crying. These similarities are great to have, but it makes it harder for me to stand out as me.

What’s special about being a twin is that we’re best friends. I know without question that our friendship will last forever because we know each other really well. I don’t have to struggle to find a person who appreciates the same things I do since she’s by my side most of the time. Her presence comforts me because she makes me think I will never be alone.

My sister used to be the bossy one. She was the “leader” when we played. I didn’t care because it was better to play with a bossy sister than to play alone. She once persuaded me to eat her broccoli and hard-boiled egg because she didn’t want to. She told me to like yellow instead of pink because she liked the pink Power Ranger and said, “You can’t copy me.” I felt second best, but when we started school, I started to feel equal to Nidia because it became obvious how much we were alike. I didn’t see it before we started school because we seemed like complete opposites at home. When we were in kindergarten we were both good at spelling our names and drawing. Who learned how to do things first didn’t matter anymore.

We grew out of our “leader/follower” stage in third grade when Nidia was in an ESL (English as a Second Language) class and I wasn’t. She wasn’t learning as fast as I was so I tutored her. I taught her how to spell long words like airplane and automobile, and how to subtract. I finally knew what it was like to be the “leader” because I was like her teacher. I felt needed. She was very nice to me when she was vulnerable, but I didn’t take advantage because I knew that if she was asking me for help, it was serious and I needed to do my best to help her. We began to see ourselves in each other and we developed a new connection. We became equal.

Going through the same experiences has also brought us closer. In fourth grade we went to the eye doctor together and found out that we both needed glasses. When we were 11 we learned how to ride bikes together and later we developed our artistic skills by learning from each other. She’s taught me how to shade and I’ve taught her how to draw fashion figures. In eighth grade, we both got braces and felt the same pain. By knowing what my sister was feeling I felt like her actual twin. Before I just felt like her sister, but after all we’ve experienced I feel lucky to have someone to share the same experiences with.

We push each other to do better in school

We’re still competitive but now it motivates both of us and it doesn’t make one feel superior over the other. We have a lot of classes together. At times she gets better grades than me and other times I get better grades. I don’t get jealous if I don’t get grades as high as my sister, but it pushes me to try harder. To help each other do better, for example, we read and correct each other’s English essays before we turn them in.

At times I worry about Nidia and I growing apart in the future, but we’ve developed a plan to keep us close. We’re going to UC Davis in the fall and we want to pursue careers in the fashion industry. We hope to have our own business someday and I’m sure we will have our own unique ideas to keep us from being the same. This year we are developing completely different collections for our school’s annual fashion show. The theme for my collection is mystery and I am using the colors purple, red and black. I’m hoping to show a collection that redefines mystery. My sister’s theme is centered on a bumblebee. She is using yellow and black and she hopes to show a collection that is innovative and beautiful.

When we get older and go our separate ways, I won’t be terrified of leaving my sister. I want us to live close enough to visit each other every day, but I don’t want us to suffocate each other by always being together for the rest of our lives. I want us to continue to share memories, but I don’t want her to be in every single one. I love being a twin because I know that as long as she lives, I’ll never be alone and she’ll always love me back.

If you liked this story, check out …

Would you believe we’re triplets? Desiree, 17, likes being a triplet, although she wishes people treated her as an individual. (May – June 2006)