In high school our nagging teachers and perky counselors tell us which classes to take and what grades to get so that we will make it to college, get a degree and be at the job of our choice in four years, and live happily ever after.

My family doesn’t have a lot of money and my grades in high school weren’t that great, so I didn’t have options besides community college. But budget cuts have made my college dream less likely. I’m struggling to get the classes I need to graduate and transfer. It’s frustrating having to put my dream of becoming a journalist on hold. I’m going to be 23 or 24 by the time I get out of a university. How is cutting funding, classes and teachers making things better for students?

As I got ready to start at Orange Coast College in August 2011, I received a notice saying that I had qualified for financial aid and it was time to register for classes. It would have been nice to know that registering is like an online fight club.

A few weeks before school started and after my English and math placement testing, I visited a counselor to register for classes. As I furiously clicked my mouse trying to get my two remedial courses, English 99 and Math 10 (elementary algebra, sigh), I prayed to the class gods to let me in without being waitlisted. When I added them to my schedule I saw the glorious word “Registered.”

A lot of the classes I wanted were full 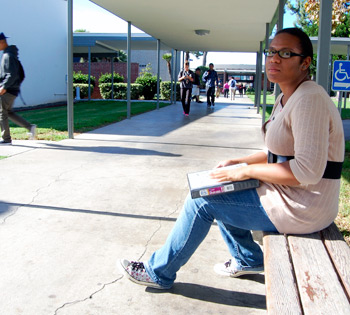 Now I moved on to my other general education classes. I had listed 15 possibilities. I was waitlisted for 10 of the classes I wanted (Film, Broadcast Journalism, Journalism and Marine Science to name a few). It shows you on the schedule how many students are enrolled in the class, how many are on the waiting list and your position on that list. I didn’t bother going to those classes and trying to add them because I was always number 25-36. So after online fight club was over I had five classes—English, Math, Geography, Ethnic Studies and Intro to Communications.

That semester I passed all of my classes except for Geography. I had to retake the class for it to count for credit and qualify for transferring. I planned to take it during winter session but then winter session was canceled. Annoyed at myself for failing Geography and my school for canceling an entire semester—the year that I enroll—I registered for the spring.

But I wasn’t able to get into the Geography class or math. Desperate, I signed up for anything. I knew that if I didn’t take any classes that semester I’d have a later enrollment date the next semester because I’d still be considered a freshman when I was supposed to be a sophomore. I also had to sign up for enough credits to qualify as full time so I could get financial aid.

I was stuck with nonsense elective classes that weren’t transferable like Sociology of Married People (I’m not married) and Intro to Sailing. I was grateful to be enrolled in Broadcast Journalism and Film but the only class that was transferable was Film.

I scheduled a visit with my college counselor. I explained to her how I didn’t get into the classes I needed, but I told her I wouldn’t let myself worry about it because there was summer. She told me, “We are not going to be offering summer courses this year. At least not very many.”

I got hired at Disneyland that spring. My coworkers told me that going to school and working during summer is impossible because it’s peak season and they don’t take any special requests for time off, even if you’re in school. A lot of my coworkers had mentioned they had tried to take online courses during the summer.

When I went to my counselor I found out that there were no online classes being offered in our school system. There were 40 on-campus classes available, but I couldn’t attend them and work full-time. I chose my job over school because I needed the money to get gas and pay for books and what financial aid doesn’t cover. I hoped I could get the classes I needed in the fall.

Having a job makes being a student even harder

When school started in the fall, I didn’t quit my job because I needed the money. I was working 20 to 40 hours a week. It frustrated me to no end that there were classes I couldn’t sign up for because they weren’t offered on days I wasn’t working. I couldn’t sacrifice my job for school but I couldn’t sacrifice school for my job either. I never enrolled in a class that was held more than three days a week, like Journalism, because that would cut down my work time.

According to a recent article in the Los Angeles Times, more than 470,000 community college students in California began the fall semester on a wait list. I was one of them. I got waitlisted for Geography, Marine Science and Japanese. I didn’t try to go on the first day to get in because I was far down on the wait list and knew my chances were slim. Luckily, I got four classes I needed, which meant I was full-time. But only two of my classes count toward my major and transferring.

Is college worth it? I would like to think so, even though it’s taking a ridiculously long time to get the classes I need and graduate.

“Overcrowding has definitely become an issue,” my coworker Cecilia Stewart told me. “I’m going to two different schools just to get the classes that I need to graduate. I’ve been here for nearly three and a half years.”

I also know coworkers who dropped out of community college because they couldn’t get classes and it was taking too long to graduate. They chose making money over school. I stay determined because I’ve always liked learning. I also have known what I wanted to do since I was in seventh grade since I always liked writing.

We shouldn’t have to decide between dropping out or going to more than one school to get a degree. We shouldn’t have to worry each semester that the following semester might be canceled or offer only half the classes, or linger around taking classes that have nothing to do with what we need just to stay enrolled so we don’t get a later registration date. I don’t want to have to face the choice of choosing school over my job or my job over school.

The community college state board voted in September to give enrollment priority to students seeking degrees, certificates or transferring. This change, which starts in fall 2014, bumps undecided students to the end of the line. Giving enrollment priority to students who know what they want to do is the right thing to do. I’ve encountered many students who don’t show up to classes and then talk about how the class and school sucks, and I’m thinking, why are they here?

I may not even finish in three years

Spring 2014 is still my graduation date but it could be later if I don’t get into some of my classes. And if I don’t pass my math class this semester I have to take it again next semester and that might push me back even more. They say community college is cheaper, but that’s only if you’re staying there for two years. If I’m here for four years I might as well have gone to a university.

We need to stop cutting money from schools and find other things to take away money from.

I don’t want to sound like I’m against going to community college. But I want high school counselors to tell students what they should expect. They should know that classes are hard to get into. It’s no longer a two-year institution so you might want to save money while in high school so you don’t have to work during college. Some people have to work. But they should be aware that it’s going to limit their availability for classes unless they have flexible hours. Meeting requirements and getting to a four-year college isn’t as easy as my college counselors made it sound. So I just want students to beware of that and be prepared for it.

l
If you plan on attending a community college, here are Destiny’s tips to help you get into the classes you need.

• Take classes in the morning or late afternoon. Most students don’t want to wake up early or stay late, so go for the times most students would dread. A class on Friday is even better.

• Take classes while in high school. If the class gives you college credit, that can speed up your graduation date.

• Take classes at more than one community college in your district. Dual enrollment gives you more options and puts you on a faster track to graduating.

• Be persistent. Classes have a wait list once they fill up. A few students don’t attend the first couple days of class, leaving room for others to get in. If you are between numbers 1 and 10 on a wait list, go to the class and fight to get in. Any number higher than that, your chances of getting added are low.

• Take online classes. This allows you to take more classes since it doesn’t require you to be on campus.