When people find out that I listen to classical music, I usually get stuff like, “It’s for old people.” Because I’m a teenager with long hair, they think I’m emo and listen to My Chemical Romance and Marilyn Manson. But the piano, strings and wind instruments playing together in classical music sound beautiful to me.

I started listening to classical music in ninth grade. I was in my room flipping through stations on the radio. I heard something that I have heard throughout my life, but never paid much attention to. The violins made a sweet but powerful sound that seemed thin enough to break. It was different than my dad’s mariachi, my mom’s Latino pop and my sister’s reggaeton. Classical music was the first genre of music that caught my attention. I listened to it from then on.

Classical music makes doing homework seem less dull since I don’t have to work in silence. It helps me concentrate because I can tune out the TV my dad is watching in the family room.

I also listen to it at night. I turn off the lights, lie in bed and daydream. Or I listen when I read a book. I like hearing instruments rather than a singer. The music is usually smooth and gentle.

It bothers me that most teenagers I know don’t think that classical music is real music. One time in my ninth grade music class, someone asked me what music I liked. I said, “I like classical music.” He looked confused and he repeated the words “classical music” because he was surprised I listened to it. I felt like I was judged because it’s different. Why can’t they accept it? It’s just another genre of music like pop or rock. 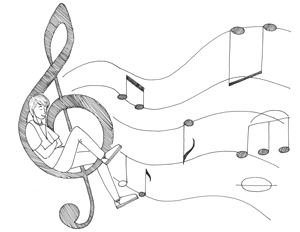 Some teens think it’s boring. I don’t think it is. It has a lot of emotion and can be very powerful. In movies, classical music sets the mood and helps you understand what is going on. When I watched Schindler’s List, a movie about a man named Oskar Schindler who kept his Jewish employees alive during the Holocaust, there was a single piano note that was powerful and solitary. It plays at the end of the movie, when the war is finally over and Schindler says he believes he could have saved more people. The music makes it seem sadder.

My family knew I listened to classical music but they never said anything until 10th grade, when we were in the car. The memory on the radio tuner had been reset so we had to reprogram it. I put on the classical music station, KUSC 91.5 FM. There were flutes making a soft sound. It was cool. After a few minutes my mother said, “Why do you like this music?” I replied, “I just like it.” My mother said, “Can I change the station?” I said OK and she changed it, then my younger sister replied, “Oh, thank you” because she wanted to change it too. I never turned the car radio to classical music again. When I’m in the car, I tune out my sister’s music and think about other things.

Once I had been playing my computer game Guild Wars too long. My head hurt, my eyes hurt. I turned on classical music and lay down. It was calm, a change from the game’s loud sound effects, yelling and intense war music with the volume blasting. When I woke up two hours later I heard a song with a clarinet playing softly. My headache was gone.

The meloday calmed me down

Another time it helped me was when I was in a serious discussion with my father. He was apologizing for getting angry all these years because I didn’t know enough Spanish to understand what he said. He told me he felt bad about yelling when he was working on a car—he is a mechanic—and gave me orders in Spanish to get the tools. I cried, feeling emotions that I had in me for the past 16 years come out. I went to my room, turned off the lights and put classical music on. I focused on the melody and that calmed me down. I wasn’t upset by the time the song was over.

Looking back, I’ve always liked classical music. When I was 10, one of my favorite songs was from the video game Megaman Legends. When Megaman goes into the Kattelox Museum, the game plays Bach’s “Air On a G String.” I liked the elegant melody and the high-pitched sound of the violin—it fit well with the scene. I heard it again on the radio a few months ago and realized it was classical music. I never realized what I was actually hearing; I just thought it was cool.

I have started getting into J-rock (Japanese rock), but I still like classical music. People have tried to expose me to pop and rock music but I’m not interested. My friend sent me a link to a song she liked by Slipknot, called “Dead Memories.” It was boring. The singer kept repeating, “Dead memories in my heart, dead memories in my heart.” I get upset by some lyrics, like when reggaeton artists sing about a woman’s body because they objectify women. Sometimes singers don’t have talent but are still popular, like the Pussycat Dolls. I understand that other teens like that kind of music. There is no right or wrong music; I just really like classical music.


Other stories by this writer …

I’m a loner but not lonely. It was worth the struggle for Ernesto, 16, to make friends, even though he still likes spending time alone. (September 2008)