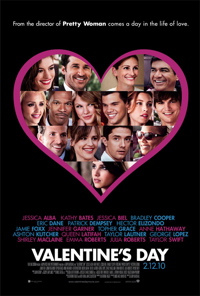 Last minute, as always, a couple of friends and I decided to see a movie together on President’s Day. The only other girl in our group and I convinced the guys to see Valentine’s Day, seeing as it was the next movie playing. I had high hopes for it. The movie follows about 800 faces you’ve seen a million times before as they interact in every possible way, and I usually like those types of movies. It looked sort of like Love Actually but in L.A.

My hopes were totally unjustified. Sure, there was a scene with someone running to the airport to stop someone else from leaving. And the Airport Worker Who Delays The Runner To Cause Dramatic Tension even (exasperatedly) says something like, "All right, who’s the girl and why do you have to get on the plane to tell her?" Clearly, the writers knew they were being unoriginal with the airport scene and thought they could get away with it by pretending it was a reference to every romantic comedy ever, not a cliché.

But in this movie, unlike in Love Actually, the lovesick young boy had no charming British accent! No crush his own age. Instead, he proposes to his elementary school teacher (Jennifer Garner), who tries to brush it off as charming and innocent. (It was not.)

Another issue I have is with the actors being typecast; This movie had Topher Grace reprising his role in That 70’s Show as the whiny, insecure small-town kid; Jennifer Garner being sweet, sunny and kind of oblivious; Ashton Kutcher being, well, Ashton Kutcher. That’s what people are looking to see, no doubt, but some surprises might have been nice.

I guess I should mention the Taylors—Swift and Lautner—who performed their one-sided characters (ditz and jock) satisfactorily in their three minutes of allotted screen time.

That’s not to say the movie had no redeeming qualities; the scenes with Anne Hathaway as a phone sex operator made us laugh with the movie instead of at it. And it was pretty cool seeing familiar buildings and landmarks—the camera panning over the “Bienvenido Gustavo” poster on the Walt Disney Concert Hall made me smile. But overall, it felt like the movie was running on a checklist of things people who go to chick flicks expect to see: Rude waiter? Check. Someone with a thick accent put in only for comedy? Check. Reference to the black character as “chocolate?” Check. Hysterical, neurotic type-A female character? Check. Sugary music playing when one character realizes they love another character while talking to a stranger? Check. Omnipresent narrator providing tired quotes and cheesy lines? Check. It’s not exactly groundbreaking, but then again I’m pretty sure it wasn’t intended to be. 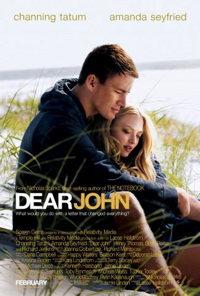 When my girlfriend and I went inside the theater to watch Dear John, she was bursting with joy about how this movie would be the next The Notebook, maybe better. She had read the book, loved it, and now was ready to love the movie. I’ve never seen The Notebook, but I’ve heard that it was one of the best romantic movies of all time. Since Dear John was being compared to it, my expectations went through the roof.

The movie starts by showing Army officer John Tyree (Channing Tatum) getting shot. The screen then goes black, and John is surfing at a beach. He meets Savannah Curtis (Amanda Seyfried) and its love at first sight. Eventually, they get together and Savannah meets John’s dad, who has a very valuable coin collection. Soon after this 9/11 happens and John rejoins the military, so John and Savannah start writing each other letters. (Hence the title of the movie, Dear John.) This goes on for the next few years until Savannah suddenly breaks up with John and tells him that she is getting engaged to someone else. While serving in the military, John gets shot. But then John gets word that his dad has had a stroke. He returns home and sits next to his dad in the hospital before he dies.

So far, the movie was just … boring.  The only thing keeping me awake was my annoyance that I had spent $22 to watch this movie. I still hoped that some magical thing would happen to make this movie enjoyable.

Instead, the rest of the movie contained so many twists and turns, that it became confusing. In the end, John makes a sacrifice for Savannah’s happiness, which I thought was pretty cheesy and stupid.

Looking at my girlfriend’s face during the movie, her face went from excitement to confusion. Usually, when a movie’s bad, I’ll be the first to say it to her. But as soon as we came out of that movie theater, my girlfriend’s first words were, “That movie sucked.”

I just spent $22 for two tickets to watch this movie and my girlfriend had basically just told me that those $22 had gone to waste. I just have one thing to say: Dear John, your movie sucked.