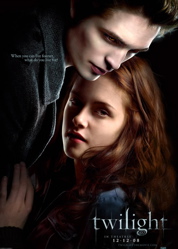 As a Twi-hard (yes, that’s what we call ourselves), I knew not to get my hopes up too much about the movie version of the book I loved so much. This is where I have to tell the honest truth. Twilight was actually a little disappointing.

My friends and I arrived to the theater at 6 p.m. for a 7:30 p.m. show, and already a line of girls (and obviously boys dragged by their girlfriends) awaited us. Girls screamed out lines from the movie like when Edward Cullen says, "What if I’m not the hero? What if I’m the bad guy?" and others played the Twilight soundtrack. My friends and I were dressed up in our Twilight gear—we’d coated our lips and necks in fake blood (saved from Halloween) to make it look like we were bitten by vampires.

At about 7:20 p.m. we were finally allowed to go inside the theater, where the fight to get the best seats began. My friends and I rushed to the top and got seats. I felt like a 6-year-old at a Hannah Montana concert, but it was reassuring since I wasn’t the only one squirming and hoping that certain parts of the book were depicted. Ten minutes later, the lights went dark and giggles rippled through the theater and I knew we were all thinking the same thing, "We must hold our screams until the movie title comes up."

This movie is different from just any Dracula or Blade flick. It starts off with Bella’s "soliloquy" about dying in the arms of someone she loves. She’s on her way to live with her dad in the rainy town of Forks. The word "Twilight" comes up on the screen and all together we lose our minds.

At some moments, I couldn’t believe that what I’ve read was being acted out in front of me on the screen. Kudos to Robert Pattinson (who played Edward) for portraying every girl’s teen idol. But drastic things were cut, like explaining the history of the Cullen family, certain powers of the vampires and scenes to explain Edward’s craving to kill Bella (Kristen Stewart). I know not everything was going to be included but some of the stuff they cut out was important. The story was told too fast and I couldn’t get emotionally connected to the characters. I went in expecting the sappy love story to be even better, but I walked out feeling a little bit duped. I really think they should have made the two-hour movie a little longer.

Also, major characters like Jasper, Alice and Emmett hardly got any lines, where in the book they are important to the plot. And Edward’s scene where he steps into the sunlight to show Bella his sparkling skin was low-budget. It made him look like he had a skin disease instead of being god-like. They also added scenes not in the book to establish Bella and Edward’s relationship. But instead of showing conversation between the characters, it was a montage (where you see the people talking but you can’t hear what they are saying). The montage was supposed to be the time they took to get to know each other, and I really didn’t appreciate that they cut it down.

Twilight however did have its good parts. It was hip and up to date and pretty funny. When Bella asks Edward how he stopped a van from crushing her while she was walking to school, he replies "Yeah. Um. I had an adrenaline rush. It’s very common. You can Google it." The acting also was really good. And the final showdown between Edward and James (an evil vamp after Bella) was packed with action! Back flips, broken glass flying everywhere and nose dives into wooden floors—I can drool just thinking about it!

I would recommend this movie to people who haven’t read the books, but be warned they added little quirky knowledge that only book readers would know, like when Edward covers his nose around Bella you are supposed to know that she doesn’t smell bad, she smells really good, enough for a vampire like him to eat. To people who have read the books, I still recommend you to see it, but don’t anticipate too much. It breaks my heart to say so, but it wasn’t what I hoped for.