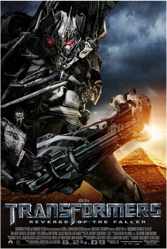 I wish I could say the second Transformers movie was as good as the first. But it was long, way too action-packed and completely ridiculous.

At the beginning of Transformers: Revenge of the Fallen, you learn that sometime between the first and second movie, the US Army has formed an alliance with Optimus Prime and other Autobots. While on a mission in Shanghai to kill Decepticons, they learn about The Fallen, a king of the Decepticons who is coming to take over Earth. Meanwhile Sam Witwicky (Shia LaBeouf) is off to college and leaving behind his girlfriend Mikaela (Megan Fox) and Bumblebee, because apparently freshmen can’t have cars.

The thing that blew my mind 20 minutes into this movie was the language and the long drawn-out action sequences. If I would have known the movie was two hours and 30 minutes (and most of that time spent on horrible action sequences), I would have left and waited for it On Demand. I was bombarded with cussing, not that I mind a couple of cuss words here and there. But if you’ve seen the first Transformers, this one is completely different, with displays of profanity and sexual innuendo coming from the robots themselves! I mean Optimus Prime saying “punk a–?!” Really?! They might as well name this movie Transformers 2: Autobots Gone Wild. I would warn a teen taking their little brother or sister to see it, since they probably won’t understand the sexual jokes.

While at college Sam thinks he’s safe but little does he know The Fallen (which the movie is named after) instructs Decepticons Megatron and Starscream to capture Sam to discover the location of something called The Matrix, which holds the power to take the Earth’s sun energy, so they can destroy life on Earth to save their own planet. Maybe it’s just me, maybe I don’t have enough testosterone to keep up, or maybe it was the fact that me and my friends were making fun of the ridiculous things in the movie, like, How do all these people get in car accidents and still walk away without a scratch? And how on earth do Mikaela’s pants stay white as she’s running through all these sand dunes and explosions? But it still confuses me.

After long scenes and chaotic robot fights, Sam, Mikaela and Sam’s roommate are running around in the deserts of Egypt looking for The Matrix with the help of other Transformer robots. The good thing about the second Transformers is the movie introduced new robots. My favorites are Skids and Mudflap, also known as the “Twins.” They were the only thing that kept me watching the movie. The robots were two stereotypical black characters that always started a fight with each other, and had some pretty funny things to say. In one scene Mudflap hits Skids in the face. And Skids is like “Ouch, that hurt” and Mudflap responds, “Yeah it’s an a** whoopin’, it’s supposed to hurt.”

Well, I’ve warned you dear reader. If you’d still like to see this movie, bring friends, bring loads of snacks and enjoy if you can. I certainly hope they don’t make another sequel.