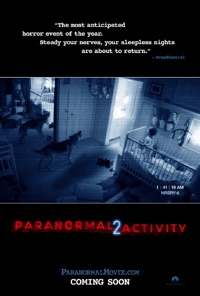 After digging the first movie, I expected Paranormal Activity 2 to be twice the scare and twice the fun. While the sequel was scary, the terrible acting and dull ending spoiled the movie.

Paranormal Activity 2 begins with a family bringing home its newborn baby, Hunter. Fast-foward a few months and everything seems great. But one day they come home to find couches ripped open, clothes all over the place and shattered glass everywhere. Daniel, the husband, becomes concerned for his family’s safety and puts cameras throughout the house, thinking it was burglars. The camera then captures scary things, like loud rumbling sounds, doors closing and opening by themselves, and shadows casting over people that happen after Daniel fires the housekeeper for using a special kind of smoke to bless the house while she was carrying Hunter. She knew about an evil spirit haunting the house and was trying protect the family. The housekeeper told this to the daughter, Ali, who becomes convinced that there’s a demon after Hunter. She doesn’t tell her dad because he told her that he’s had enough talk of ghost and demons. For the rest of the movie the camera captures more unexplainable things.

I admit the movie was terrifying especially when Kristi is in the kitchen alone and all of a sudden all of the the kitchen cabinets open. However, the acting was terrible. Brian Boland, who plays Daniel, was the worst. At one point he regrets firing the maid and begins to pace back and forth with his hands on his head saying, “She tried to tell me but I didn’t listen.” His overacting was so cheesy and not believable. He seemed more irritated than genuinely angry at himself for not listening.

And while the ending to the first movie was amazing, giving me one last scare to remember on my way home, Paranormal Activity 2 lacked in that department. I was hoping to almost have another panic attack (like with the first movie) but unfortunately the ending was very dull. Also, at the end of the movie, when all of the horrifying events are happening (I don’t want to give away anything) the movie quickly shifts to three months later. What happened between those three months? I wish they could have shown it or at least have said. Unfortunately we’ll never know.