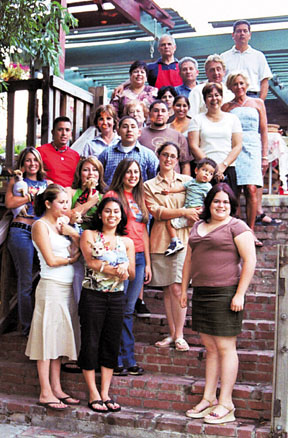 My family gathered for a photo on the back steps, including my mom and dad (at the top of the stairs), my grandma Rose, my sisters Patricia, Vanessa and Veronica; cousins Andrea, Carlos, DJ, Natalie and Sofia; my nephew Danny; my aunts and uncles Charlie,
Photo by Paulina Ayvar, 16, Westchester HS

At a hotel in Guadalajara, I heard these two girls say, "Esta niña no sabe español. ¡Mira la gordita!" ("This girl doesn’t know Spanish, look at the fatty.") I gave them a dirty look. Stunned, they said, "You speak Spanish?" In an angry voice I whispered, "Sí." Quickly the cowards walked away, embarrassed at what they had done. I have very fair skin, and my English is better than my Spanish, so no one ever guesses that I am Mexican. It’s frustrating when people ask me "So are you Irish, German, Asian or Dutch?" Often I find myself laughing as they continue down the list trying to guess what I am. When I tell them I am Mexican, I feel that they are surprised not to see the stereotypical Latina that is portrayed so much in movies: pounds of makeup, thick black hair, a heavy accent and brown eyes. Being Mexican does not necessarily mean you have to look the part!

When I was younger, girls from school called me a "Valley girl" since I was born here. We would get into heated arguments as they tried to convince me I was only American. This one man visiting us from Mexico told my cousins and me that we were all fresas (rich snobs). It is also implied that we were ditzy, which I believe was what the guy really meant. Growing up I felt I could not win; Mexicans saw me as a fresa, and Americans saw me as a wannabe. My parents, grandparents, great-grandparents, and all the rest of my family before me were Mexican. It’s in my blood, so when people try to tell me that I am not Mexican, I get mad and wonder who gave them the power to make such a harsh judgment.

It’s hard for me to explain what my Mexican heritage means. There are many great things about being me. My family is very close. We love each other very much, and always make it a point to come together as often as possible. We have carne asadas, which is a barbeque, Mexican style. My dad calls these get-togethers a "taquisa," or in Dad vocabulary, "Come and eat as many tacos as you possibly can!" Usually we go all out: the Mexican rice, the refried beans, hot salsas, cilantro, tomato, onions and, of course, guacamole. Not that I’m bragging, but my family makes the best Mexican dishes in all of California. OK, so I am bragging, but whenever we have dishes such as enchiladas, or mole, you can practically taste the culture and tradition!

Holidays and birthdays are big events in my family. This last Christmas we were disappointed that we would have to be one family member short. My cousin Zurdo was serving in the Air Force near Santa Fe, New Mexico. My dad suggested that our family take Christmas to my cousin. We packed up the entire family—eight dogs included—and took the 1,000-mile road trip up to New Mexico. At the hotel, it looked as if there was dog convention in town! People stared at us as they saw seven Chihuahuas and a big German shepherd walking in the hotel accompanied by about 20 people. Still, my cousin Zurdo was so happy, and we all had the best time. My grandparents smiled non-stop. Not only were we together, but it was snowing the whole week we were there! All of us, for the first time, had a white Christmas.

The best party I ever had

In Mexico, girls traditionally have a coming-of-age party. When she turns 15, the girl is dressed up in a beautiful gown, and the entire family gets together to honor her. The formal name is quinceañera (pronounced keen-say-uh-neeYAIR-uh). When I was about 11 years old, we attended a quinceañera of a distant cousin of mine. I saw my cousin in this beautiful dress wearing a tiara; it was then that I started bugging my parents about having one. At first neither of them took me seriously and thought that I would eventually forget about the idea. Finally the time came when I was going to turn 15. My mom rolled her eyes and knew that I would not let her forget about the party I wanted. She reserved a hall, hired a DJ and camera crew, hired a decorator and ordered a cake (we must have tried about 10 samples!). The dresses were custom-made. I felt like a princess in my cotton candy pink dress and silver glitter shoes.

I selected a court of seven couples, mostly my cousins. For two months we learned salsa and cha-cha to perform at the quinceañera. We would assemble on my front driveway to practice dancing. At times stress would build up and everyone just needed to relax. One practice my sister stretched out her arms and started to spin in circles like a helicopter. Most of us were not really paying attention, but suddenly we heard a slight crash. We turned to find Vanessa stuck in the hedge! Everybody there could not stop laughing; my friend Mauricio kept yelling through laughs, "Black Hawk down, Black Hawk down!" We pulled her out and continued to laugh as we saw the hole she left in the hedge. Our dance routines turned out to be a smash hit! Everybody at the party danced so much that they started throwing off their shoes. My mom’s theory of a good party is this: If your feet still hurt the next day, then it was a success. Well, everyone who attended the party complained of sore feet even after a week had passed, myself included.

My family appreciates being able to celebrate like this. My parents never had it as easy. My mom was born in Tijuana, México, but crossed the border when she was two. My grandparents later sent her back to México with my aunt to study there when she was nine. At the Mexican boarding school, she and my aunt were teased for not knowing how to speak proper Spanish. They stayed up late with a tutor re-learning their native tongue, but were never fully accepted as equals. My aunt had to defend my mom, since my mom was so shy. One time on a bus ride going to town, a bully started picking on my mom. My aunt grabbed her hair, threw her to the floor of the bus and beat her up! My mom told me that the girl was such a troublemaker that the school ended up expelling her.

Valentina's family often gets together for a taquisa, a Mexican-style barbecue.
Photo by Managing Editor Libby Hartigan

When my mom was chosen for the honored position of holding the Mexican flag in a parade, many girls protested, saying that they didn’t want a pocha holding their flag. Pocha is a derogatory name for someone who is born in Mexico, but lives in the United States, knowing little of his or her culture and first language. It was an insult to my mom and aunt because they were born in México and it hurt them to know that the girls saw them as inferior.

Bearing the flag in the parade was a big deal for my mom. It gave her a great respect for the flag, which stands for our country; it is a symbol of whom we are. It is appropriately brought out in Mexico for special occasions, like the parade my mom marched in. My mom’s feelings have been passed on to me. I was very happy when my mom got me dual citizenship this year—I’m legally Mexican and American. Not only do I view the Mexican flag as sacred, but also I view the United States flag with the same respect. Ever since Sept. 11, 2001, we have had the United States flag displayed in honor of the armed forces and anyone who lost their life on 9/11. My parents have taught me to honor this great country that allowed them to succeed and prosper. My dad owns a successful refrigeration business and my mom is a real estate agent.

My dad also struggled. He was born in Michoacán; he left school after fifth grade to help feed his family. What a family it was, too—my grandmother had 25 children! Unfortunately, only 15 survived (10 girls and five boys). At age 14, my dad lied about his age and joined the army, where he spent his time on horseback burning marijuana fields to prevent the leaves from being harvested. When he finished serving, he took two trains and ran across the San Bernardino Mountains to get here. That is not even half of the struggles he endured.

After arriving in the United States it was hard for my dad to get work. He would do odd jobs for whoever was willing to pay him. At one point he washed bakery pans. At night he and another worker slept in the bakery oven to stay warm! He was a lumberjack at Lake Isabella, and washed dishes for various restaurants. Later he got into the air conditioning business. When my dad had earned enough money he decided that refrigeration was what he wanted to do and studied to obtain his license. He always remembered to send money to his family back in Michoacán, and continued doing so for a long time.

At one point my dad decided that he would read as many books as possible. He continues doing so today; his self-education has made him the successful businessman he is now. It surprises me to see how much information he acquires. In my first year of high school, he borrowed my history book and read all 919 pages! People often wonder how a man with so little schooling could be so intelligent.

My dad inspires me

When my dad was explaining his past to me, he kept saying that he was one of many to cross over the border and told me that his story was nothing special. I argue the contrary, because unlike many immigrants, he survived and succeeded. I find my dad’s story inspiring and amazing and I believe others do too. 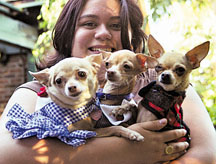 It's hard to resist the adorable Chihuahuas in Tina's family—they bring all seven to family events.
Photo by Managing Editor Libby Hartigan

My father’s ultimate goal is to give his children what he was not able to get as he was growing up: a good education. I want to go to USC after I graduate from high school, and continue on to Columbia University in New York for my master’s degree in Journalism. I will accept nothing but the best for myself, and I won’t let anything cloud my determination along the way.

Some advice I’d like to give to all you Latinos out there: You are capable of doing anything that you put your mind to. Use the opportunity your parents gave you to get a good education in order to become successful in life. Let no one, even yourself, make you feel inferior and make you think you can’t do something. Allow me to use a well-known phrase in conclusion to this article. The words are simple, yet the meaning is great: "Sí, se puede," or in English "Yes, you can."