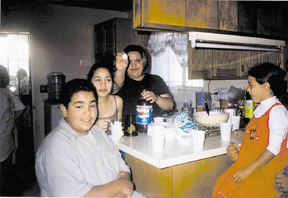 When I was about 15, I was slightly overweight. I weighed around 189 and stood at 5 feet 5 inches tall.

I don’t really know how that happened. I think it was a combination of things: I liked to bake, my mom’s a good cook, Circle K’s chili dogs tasted great smothered in cheese. In fact, I licked the cheese off the wrapper because it tasted so good. It was more like eating cheese with a hot dog in the middle. At school, they sold fudge brownies for 50 cents. Every day I ate a brownie after lunch. It was my favorite dessert.

I wasn’t all that physically active either. My P.E. class was a joke. Gym class was something we were supposed to do outside of school. The gym teacher gave me a paper that required signatures from family members to verify that I worked out. But I never broke a sweat. I made exercises up, like "I ran half a mile." I filled up the whole page with phony activities and had my mom sign the paper when she left for work at 4 a.m. It was so early in the morning that she didn’t have time to question anything.

It was hard to make friends

I also didn’t have many friends at the time. Everyone went out with their friends and was starting to date, but not me. I stayed at home a lot with my mom. Inside though, I wanted to go out with people. Sometimes I’d ask people, "Hey, what are you up to tonight?" Secretly, I hoped they’d invite me. But they didn’t. Not once.

That was OK, I guess. I’d go home, play Nintendo, read a book or clean my room. Really though, I was sad. My sister always told me that I wasn’t a normal teenager. It felt like everyone thought that. At first, I didn’t think so. At first, I thought it was just me.

But when I saw more and more people going out in groups, I thought that maybe my sister was right—I wasn’t normal. People went to Disneyland, the Block at Orange, parties in Los Angeles and stuff like that. I wanted to do that. But there wasn’t anyone to do that with me.

Sometimes I took the bus to the Block at Orange to watch skaters go up and down the ramps. I rented movies at home with my mom’s husband. But really I wanted to be out with friends. I felt all alone, like I was segregated from the rest of civilization.

People called me fat ass, round and sometimes fluffy to be politically correct. If I played football with anyone, I was always supposed to be the offensive lineman, the guy who always has to be in the way. If I goofed it up, people said, "You can’t get him? You’re double his weight!"

In soccer, I always had to play goalie. If I missed the ball, people said, "You can’t catch the ball? It’s round like you."

I could never get away from the weight thing.
My cousins told me that I was fat and that if I lost weight, I’d get a girlfriend. Everyone said stuff like that. I tried to brush it off, but after hearing it for so long it did start to affect me.
Things at home weren’t going all that well for me. My mom’s husband and I argued a lot. It was uncomfortable to be at home with him.

So I decided to move in with my dad. He lives in Phoenix, Arizona—home of the worst temperature known to man. It was probably the hardest decision I had to make in my life. I was scared to leave the only place I knew, but I couldn’t stand being in California anymore. I made the only decision that seemed sensible to me—I left.

Living in Arizona was different from California. Things were more spread out there. Bus transportation was limited. There was no service on Sundays or after 8 p.m. during the week. People mainly got around by car. I didn’t have a car and when I asked my dad for one, he gave me a bike instead. Then he told me to get a job.

The first time I hopped on the bike, I was anxious to see what was out there. My goal was to go to the arcade that day—a 10-mile ride round-trip. I got to explore the city that day seeing for the first time how spread out everything was. Houses were everywhere but stores seemed to be at least a mile apart, making it hard to get anywhere. On top of that, it was at least 100 degrees outside. I stopped at least three times to get sodas to cool off. I didn’t know that I should drink water instead. I felt sick after all the sodas. I never made it to the arcade that day. I had to turn my bike around. The heat, plus my being out of shape, made for an uncomfortable ride.

I biked everywhere and changed my eating habits

As the weeks went by, I learned tricks to beat the heat. For starters, I shaved my head. I looked horrible but the reward was that I stayed cool a little longer than usual. On my bike rides, I learned to stop for water and to do it frequently. I had two cups at every stop—one for me to drink and one to pour on my head. I learned which buildings were air-conditioned and mysteriously found myself in them day after day. Sometimes on long bike rides, I’d hopscotch from one air-conditioned building to the next. The library was my overall favorite target. It was five stories of central air-conditioned heaven. 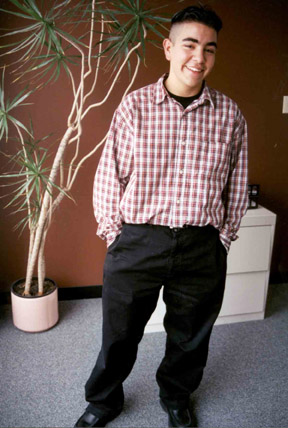 So for the first two months in Phoenix, I hung out in air-conditioned buildings and drank a lot of water. I cut soda out of my diet, because it kept making me sick. I cut other stuff out of my diet like mayonnaise after the time I saw a Jumbo Jack deteriorate in the sun. The heat made the mayonnaise bubble. It looked so disgusting on the bread that I vowed never to eat mayonnaise again.

As time went on, riding my bike became more natural. I got stronger and maneuvered quickly around the city.

One time my sister unexpectedly drove to Phoenix from Los Angeles for a car show with a friend. She called from the downtown Convention Center and wanted to meet me there. I told her to wait outside and I’d be there in 10 minutes. She laughed at the idea and said, "Yeah, right!" Since the Convention Center was around four miles from my house, she didn’t believe that I could bike there in 10 minutes.

I was so excited to see my sister that I jumped on my bike and never stopped pedaling. When I came to red traffic lights, I didn’t want to stop, so I cut through side streets to not lose any time. I knew all the short cuts.

When I got to the Convention Center, I jumped off my bike and took a minute to shake off the sweat on my shirt. I rode so quickly that I needed a minute to catch my breath. My sister wasn’t standing outside the building, like we had discussed. In fact, she wasn’t anywhere to be found. I finally found her inside an air-conditioned truck drinking a cold glass of Gatorade. She jumped up and said, "Oh my God!" I had surprised her by getting there so fast. "You look different," she said and then swatted my bald head. "You need to grow your hair back." We hugged and then walked around the Convention Center together. It was great to be with her.

I think the bike became my escape tool. I’d get on my bike and think about stuff, mainly solutions to my problems. Things weren’t so great in Arizona. I thought about moving back to L.A., renting an apartment and finding a job. The bike helped me to clear my head. I rode it for hours, because I had a lot on my mind.

After eight months of blistering heat and other stuff, I decided to move back to California. I missed it there so much and Phoenix wasn’t cutting it for me.

A few weeks later, I flew back to Los Angeles. My sister and her friend picked me up at the airport. My sister took one look at me and said, "Damn, you look different. You’ve changed. You lost weight."

Weight? I didn’t know what she was talking about. My dad’s house didn’t have a scale, so I never knew how much I actually weighed. It never occurred to me to check. Plus, I saw myself in the mirror every day and never noticed any changes.

We returned to the apartment that I was going to share with my sister. She had a scale in the bathroom. I hopped on. Sure enough, I had dropped 30 pounds. I couldn’t believe it! I didn’t feel any different, but I guess that I looked different. My sister got on the scale next. So did her friend. I think they hoped they lost weight, too. It was so funny.

It didn’t matter how much weight I lost. To me, I was still the same person. But then I noticed how differently people treated me once I was thinner. One time at the mall, a sales person came right up to me and asked if I needed help. Before my weight loss, no sales people ever helped me. Now they always talk to me.

When I took the bus, I realized that more people were willing to start a conversation with me for no reason. Again, that never happened to me when I was 30 pounds heavier. I wasn’t used to all the attention though, and didn’t talk back to the people.

The reason for all of these little things didn’t click in my head until almost a year later. I realized how nice people are to thin people, and rude to heavy ones. That’s really wrong and prejudiced. Inside, I’m still the same guy I was before, but because I look different on the outside, I get treated nicer.

These days, people call me to go out. I have a social life. I even pick and choose my friends. We play pool a lot. I’m getting used to being included in more social events, but haven’t forgotten how it feels to be treated with disrespect.