For the past two years I was part of a club at school called Youth-2-Youth that held voter registrations at school and led discussions on politics. I learned the importance of being an educated citizen and that I hold some power—the power to vote. I am responsible for helping choose the people who will run our country and make decisions on issues I care about, like same-sex marriage, immigration and abortion rights.

This is why I registered to vote as soon as I could. I can’t wait to vote in the upcoming election. I feel lucky that my first time voting will be for president!

When I was a sophomore, I saw a presentation by Rock the Vote. They said that as young people, we hold more power than we know. We have influence over what happens in our country because the moment we turn 18, we are voters. I felt empowered, even though I had to wait. This was my first encounter with the political process. It made me want to be a part of it.

When I got home, I created an account on the Rock the Vote website so I could get updates on elections and a reminder to vote. As the years went by, I received many reminders to vote and whenever I got those reminders, I would sigh with a little frustration and look forward to when I could.

About a week before I turned 18 my plan was to register through Rock the Vote’s website. However, before I could even start the process, I was sent a voter registration application in the mail. I am not sure who sent it to me, but it looked like the voter registration forms at the post office. 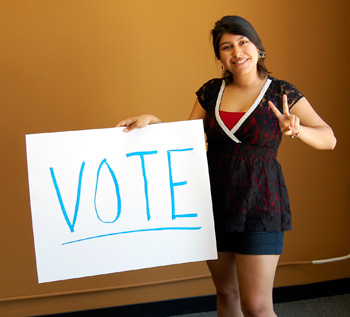 It asked for my full name, address, birthday, status of U.S. citizenship, my party affiliation (which political party I wanted to sign up for) and for my driver’s license number or the last four digits of my Social Security number. I was nervous when it asked for my driver’s license number because I don’t have one, but then I noticed that I could use my Social Security number. Overall, I was surprised how easy this form was to fill out.

I got to choose my political party

For party affiliation, I could choose from three options: Democrat, Republican or decline-to-state (which means not choosing any political party). I also had the option of writing in one of the smaller parties, like the Libertarian or Green parties. I chose the Democratic Party because when it comes to abortion, I’m pro-choice and I favor legalizing marriage for same-sex couples. Once I filled that out, I signed and dated the form. The return address was already printed on the envelope; all I needed was a stamp. I mailed the form and I was done. It was free to register and it took only about five minutes.

It’s also easy to register using an online form. I think Rock the Vote is the best place to go because they will email you (if you choose that option) to make sure that you have signed and mailed the registration application. If you have any questions you can email them.

Go to www.rockthevote.org and click the large, red “REGISTER HERE” button in the upper right corner. This will take you to a form that will ask all the same questions as the application I filled out. This form gives the voter more political parties to choose from, such as: Democrat, Republican, Green, Libertarian, other or decline-to-state. Once this form is complete, Rock the Vote sends your application to your email so that you can print it out. All that’s left to do is sign it and mail it to the return address found in the email.

Another way to register is at the DMV. The voter registration form is on the back of the driver’s license/California ID application. Once you finish you sign it and turn it in. Everything is finished at the DMV.

Despite how easy it is to register to vote, not everyone does. My parents don’t vote. They believe that their vote wouldn’t make a difference because according to them the candidates “suck anyways,” so there’s no point in voting.

I’m disappointed that my parents don’t vote. I believe that it’s my duty as a citizen to vote and I can’t wait. The registration process was easy and it didn’t take much time. Though all I did was mail in some of my information, I felt as if I achieved something significant. And I feel a sense of pride knowing that I am doing my part by being an educated and politically active citizen.

You must be a United States citizen, a resident of California, 18 years of age or older on Election Day, not in prison or in county jail, and not found by a court to be mentally incompetent.

The deadline to register to vote in the presidential election on Nov. 6: registration must be postmarked no later than Oct. 22.