According to all the statistics, I shouldn’t be doing well. As a Latina in foster care, who was abused as a child and came from a poor family, I should have been a drug addict, gotten pregnant or dropped out of school. Even my own my family thought I was going to end up like my cousins. All of them had kids when they were teenagers and didn’t go to college. I made the choice to succeed and prove the statistics wrong.

Growing up my dad was abusive. He would hit me and my brother and sister on our bare butts with an electrical cord as a punishment. My dad hit my mom a lot too. I wondered why she stayed with him but I realized it was because she didn’t have an education that would let her get a job and support us on her own. My mom went to school only up to sixth grade, which was customary in Mexico, where she grew up. I learned at a young age that my education was important.

Over the years, even though I moved many times and had to take care of myself, I managed to stay focused on my education.

When I was 7, my dad was arrested because of his abuse. My sister left to live with my aunt and uncle. My mom didn’t have a job so we moved to Mexico to live with my grandparents.

School was an escape from everything. At school I felt like I had a family. I always helped my friends and they helped me. I’m the type of person who asks for help when I need it. My teachers would help me with an assignment or teach me a better way to hit the ball—they were always there for me. When I got a good grade it would make me feel good about myself. I felt like my education was the one thing that was going well in my life. School was what made me happy.

When I was 12, my brother’s dad showed up. My brother moved with him to Arizona. Once he left, my mom became a different person. She started hanging out with my 16-year-old cousin. She would go out to clubs and wear my cousin’s clothes. She was rarely home. At times she would leave for days at a time. At home, I would try to focus on my soap opera, but I’d wonder, “It’s late, where is my mom at?” Then I would think, “It’s her loss, she’s going to regret not spending time with me.” I decided to make good decisions, unlike her, and go to school and get good grades, because I’m the one who’s going to live with the consequences. 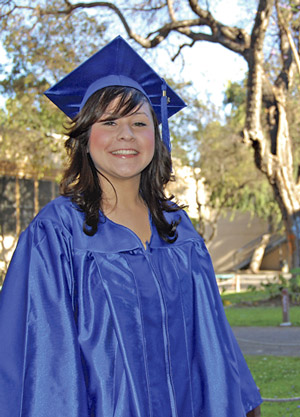 My mom didn’t want me anymore

A few months later, my mom told me that I’d be moving back to California to live with family. She said my dad would be getting out of jail soon and she believed he would harm us. But I knew that was just an excuse because she wanted to enjoy her life without me.

Who would do that to their own child? First I felt sad, but I began to think about it. I didn’t want to be there if she wasn’t going to take care of me and didn’t want me.

First I lived with one of my cousins, who did not know how to take care of me. After a few months I moved to San Francisco with my aunt. My aunt tried to make me feel like a part of her family. I made friends and continued to get good grades. But after about two years I guess my aunt got tired of me (I don’t blame her I wasn’t her child anyway) and like everyone else she also gave me away. This time I had nowhere to go. My mom’s side of the family was poor and could barely take care of themselves. And my dad’s side of the family didn’t want me.

My social worker came to pick me up on Sept. 7, 2007, a day I will never forget. I was about to turn 15 and was told by my social worker that I would be returning to L.A. and living with a “new family.” The thought of living with complete strangers was horrible.

When I met my foster family, my foster mom told me to tell people that she was my aunt, so that I would not have to explain my situation to anyone. I felt like being in foster care was something to be ashamed of.

My foster mom made us clean before we went to school, after school and before we went to sleep. I knew that it was not right to be treated that way. My second foster mom was just as bad. I didn’t like living in a place where I knew I wasn’t wanted, but I didn’t want to go to another foster home because I didn’t know if it was going to be better or worse. I wanted to be on my own so I could make my own decisions. But I thought I had to wait until I was 18 when I was out of the system.

One day I told my social worker that I wanted to leave there so bad. She said she thought there was a way but she didn’t know much more. I did research online and found out that once I turned 16 there was a possibility for me to live on my own in a housing program for foster youth.

I was happy and relieved. I knew that was where I belonged. I continued to do well in school and got a job as a clerk in a high school.

I remember once getting home around 7:30 p.m. after work. I was so tired from doing spreadsheets on the computer that I didn’t want to think about my AP English homework. I wondered how I was going to manage everything when I was living on my own, but hoped that I would come up with the answer.

As soon as I turned 16 I told my social worker to fill out her part of the application for the program and submit it. She told me I was too young to be living on my own, but I think she knew I could make it, so she turned it in. I went to the interview and was told right after that I was accepted into the program. My dreams of living on my own were finally going to come true.

The program provides you with an apartment that you share with a roommate (but you have your own bedroom), all the bills are paid, you have furniture, and they give you money for food, laundry and personal items. You must attend school and they suggest you have a part-time job. They teach us things like how to make a budget, clean, write a resume and cover letter, and comparison shop to get the best deal and save money.

Living on my own added more responsibilities

The closest apartment in the program was 15 miles from my school. I didn’t change schools because I loved my school and friends. The first time I got the bus, it took me almost two hours to get to school. I thought, “Wow, this is far. It’s really going to suck!” I was about an hour late. I realized I had to wake up at five in the morning and leave my house by 5:30 so I could get there on time. I panicked a little. Those thoughts of whether I was going to be able to make it, and my social worker not believing in me, came back. I told myself I have to do this. I didn’t want to go back to a horrible foster home.

The bus came only once an hour. If I missed it by a minute I would be more than an hour late, which would happen to me every other day my junior year. My teachers were understanding because they knew it was difficult for me to get there. I would go to bed late after finishing my homework or doing chores and was always tired in class, but I knew that if I fell asleep I would be behind. There were times when I just couldn’t take it and had to take a small nap, but only when I knew I wasn’t going to miss anything important. I’d usually tell one of my friends to wake me up.

It was hard living on my own. I had to manage my time so I could cook, do my homework, clean and do my laundry. But now I finally enjoyed coming home, to a place where I only had to clean once a day and didn’t have a foster mom nagging me.

My senior year was the most difficult because I had to write so many essays for class, college applications and scholarships. I was taking honors classes. I had to work hard, but I was more determined than ever. I really wanted to get into a good college. I still had to get up at 5 a.m. but I was able to catch the bus on time. I learned to manage my time better. I tried getting as much done during class as I could so that all I had left to do at home were my college applications and essays. I couldn’t afford a computer. So almost every day I would go to my boyfriend’s house to use his laptop and I would take the bus home at night.

During Senior Award Night I got awards for most improved in English and attendance and for being a college peer counselor. Then they announced the last award of the evening, Against All Odds. The announcer, our college counselor, who knew me very well, said that he believed this was one of the most important ones. I then heard my name. I smiled and went up to the stage. I tried not to make a big deal out of it because I didn’t want to embarrass myself or make others feel bad, but inside I felt honored. It’s nice that they saw I had to work extra hard.

Thanks to the support of my friends, teachers, boyfriend, counselors and the staff in my housing program I was able to accomplish what I wanted. I also had my grandmother, who had moved back to the United States. Like my mom, she only had a basic education, but she knows that with a good education you can get a better job. She tells me that she hopes to see me graduate from a university. Of course I miss my parents, and I’m disappointed by their poor decisions, but I learned from their mistakes.

I worked really hard, but it paid off. I’m going to California State University Dominguez Hills. I’m going to have a career. I’m going to be able to provide a safe home for my kids when the time is right and it’s all thanks to the education I received.