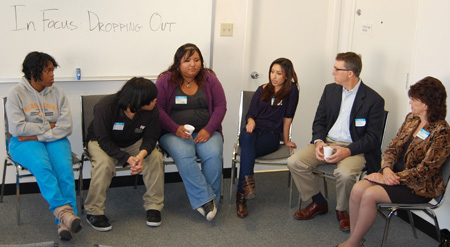 Students (from left) Charmaine Peggese, Ernesto Pineda, Patricia Chavarria and Solange Rubio talked with a Los Angeles Times reporter and a principal about why students drop out.

Patricia Chavarria, 18, Cesar Chavez Continuation HS (Compton): At Compton High I didn’t really have a teacher that I could go to and I had a lot of trouble with algebra. The teacher didn’t go through the steps correctly and it was difficult for everybody to understand it.

Sophia Theoharopoulos, principal at Cesar Chavez Continuation HS: Mr. Mills, who is not your math teacher, he is your English teacher [at Cesar Chavez]. How did he help you?

Patricia: He’s always telling stories about students he’s had. They start to fail and then he helps them and so he would always tell me, “Never give up.” I always go up to him when I need something. I go to him like when I have problems with math and he helps me sometimes.

Mitchell Landsberg, education reporter for the Los Angeles Times: So, why do you think it’s so hard?

Solange Rubio, 18, Leuzinger HS in Lawndale (2009 graduate): I think it definitely starts in elementary and middle school. A lot of students start getting used to being absent a lot in those years and so they think they can continue to do that in high school. A lot of it also is parent involvement. I know when it’s Hispanics who are dealing with the issue, their parents are either immigrants or they are also immigrants themselves. And they don’t know the school system, they don’t know how it works. And I know that a lot of parents don’t get involved at Leuzinger because they don’t speak English. Why would they come to a teacher conference? A teacher speaks all English and there’s not enough people to translate for them. And open houses, when the principal gives the open welcome, they’re speaking in English and the parents, they’re sitting confused.

Solange: You have to ask for it. My mom doesn’t speak English and I would have to translate for her. Not all students are gonna be willing to go with their parents.
My freshman year I had to translate for parents at a meeting where their students were at high risk of failing and dropping out already and they were in their freshman year. And I remember talking to these parents and they were like, “It was so hard for me to just go to this meeting. I have to work” and they didn’t know how to handle it. They don’t know what after-school programs are offered. They weren’t told anything. Their kid knows the system better and hide letters from them.

Sophia: I do have to agree with you that sometimes the preparation is lacking. And we find that not only in algebra but in reading as well. If you have a student that is not passing, let’s say, their English class, when you put them in an intervention class, that is not going to give them the support they need. They need to take the course over with additional support in order to master that content. Otherwise it doesn’t seem to work very well.

Ernesto Pineda, 18, Animo Film & Theatre Arts Charter HS: I had algebra in 8th grade. Then I went to high school and I had to take algebra again. Then I had to take geometry and then geometry again because I didn’t do so well. And now I’m taking Algebra II.

Solange: What worked in my high school was our AVID class. That’s who you have there for you after school and I know my AVID teacher worked hard. She was there early in the morning and she was there late. I know all of my AVID senior class got accepted into at least two colleges. Out of the 400 that graduate, only 100 got accepted to a four-year university and 30 of them came from my AVID class.
The AVID program is a class designed to help students learn about college. Senior year, your AVID teacher helps you apply to college. You work on your personal statement and she reviews it. And we would have discussions about ways to empower ourselves and that was really helpful.

Mitchell: In other schools where I’ve talked to people in AVID programs, it’s their main connection to the school and it’s the closest relationship they build with a teacher.

Solange: I notice that the teachers that I had the most connection with, I had them more than just once.

Mitchell: Ernesto, what are the advantages of a small school?

Ernesto: I know all the teachersby name. I know which teachers can help me if I have an assignment due or I don’t understand a certain topic. Also, since most of the teachers know most of the students, they can pinpoint the problem with each student as well.

Mitchell: Patricia wrote that she was home for 40 days before the school did anything and that was just sending a letter home. Would that happen at your school?

Ernesto: They do get on your case when you’re absent. They call your house and ask you why you did not come. And we also have open house between the teacher and the parents. What’s going on with the student? What are they succeeding at; what are they having difficulties with? They also have to do “parent hours.” They have to do something helpful for the school. They sometimes serve food or you can go on a field trip with the students. So, we have the parents involved in the school as well as the students. For each student to get a diploma and pass FTA, they have to do a certain amount of “Parent Hours” for the student to be free. (Laughter) I mean, not be free, but get a diploma.
But I’m going to tell you, there is one problem. There is a large group of students in ninth grade. But as soon as they enter 10th grade there is a whole bunch of students being dropped. They’re dropping students each time they go up a grade so only the most successful ones actually pass.

Mitchell: So what happens to them? Where do they go?

Ernesto: I’m really not sure. What I do know is what they’re doing wrong. They’re not listening to the teacher, they’re talking during class, they’re not focusing. They don’t put effort in their school. They just come in and don’t do anything.

Solange: In my school a big issue is that they come into high school with, like, a fifth-grade reading level. And if I could put myself in their shoes and if I was given a novel that’s ninth grade level, I wouldn’t want to read it and my excuse would be “I don’t care about school.” We had a class called “Read 180” which would help those students but that also got cut. So I don’t know how students are going to get up to level again. If you put those students who can’t read with the students who are at level, they’re going to be disruptive.
In my biology class my freshman year, there were seniors that had retaken that class three times already. I didn’t learn anything and I got away with being absent because the class was so big, the teacher kind of gave up. Everybody was talking and it was the students who had taken that class three times that were the ones talking. I think they’re frustrated that they had to take that again, especially with a teacher who doesn’t care and who kind of gave up on them too.

Ernesto: Failure just keeps piling up on them and they decide to give up. And sometimes the parents don’t really care. I saw one student whose father was just like “whatever.” Our principal actually went up to the father and they had a discussion but the father really didn’t care. He didn’t have any hope for his child I guess.

Susan LaTempa (audience member): Patricia, are there things that you found helpful in continuation school that you feel would be helpful at regular high school?

Patricia: Well, it’s small so the teacher has time to individually talk to students. There are classes that give more credits.

Mitchell: Patricia, did your parents not know or did they not care that you were out of school?

Patricia: They didn’t know because my mom would take my sister to school. From there she went to work. I was just so tired of school and algebra so I would pretend like I was getting ready to go to school and then once my mom left, I would go to bed. And she didn’t know that.

Audience member: One thing that hasn’t come up in this conversation is the charter movement. Would this happen at a charter school and what would be different?

Ernesto: I think it also not just the teacher’s and the school’s effort. I think it’s also a home effort. There has to be effort and a drive from the parents as well. I do need to graduate. [My parents] constantly tell me that and they hope … yeah, they push me to graduate.

Mitchell: If you didn’t go to the school you go to, what would be your regular public school?

Mitchell: Which of course now is also led by Green Dot. Do you think that things would have been a lot different for you if you’d gone there?

Charmaine Peggese, 17, Cerritos HS: The better thing about Cerritos is the teachers there because they’re more helpful than at Gahr. They try to help you improve and if your grades are low, they can get you some help. At Gahr I used to get straight Fs and I used to ditch class. At Cerritos, I want to learn and now I get As and Bs. Cerritos has helped me a lot. Gahr is bigger and Cerritos is smaller.

Gareth Wigan, former L.A. Youth advisory board member: Yes, it seems to me as if a lot of it comes down to class size.

Solange: In my district, there are three high schools. Lawndale HS has a really good reputation and Hawthorne HS has a better reputation, then Leuzinger. I would go to the [school] board meetings and basically, they kick every single student out who’s doing bad or failing, from Lawndale HS to Leuzinger. And the same thing from Hawthorne because economically it’s better for the district. The district gets money if one school at least is doing good academically. So all the bad kids are in Leuzinger. So there’s no surprise why we’re doing bad. It just kinda makes me angry that they do this and then blame us or blame the teachers. I honestly think the administration has a lot to do with how these schools are doing. Our superintendent I don’t feel is doing his job for the right reasons.


If you liked this story, check out L.A. Youth’s discussion of how a continuation school helped four girls stay on track to graduate after they struggled in regular high school.