When I was 13 years old, I started going to a very small school with about 20 students. On my first day I overheard remarks like “Oh he’s gay.” I think the other students knew I was gay because I was from a group home for gay and lesbian foster youth called GLASS (Gay and Lesbian Adolescent Social Services). The next day, someone asked, “Are you gay?” I had accepted myself and come out to the people at my group home, but I didn’t know how the students at my school would react if they knew. At my previous school, some of the kids had fought me and called me names because I was gay. So I said “no” and someone from behind me who also was from GLASS said, “Don’t lie. Tell them you’re gay.”

The next day on the bus the same boy who had asked me if I was gay threw a marker at me. I got out of my seat and hit him and we started to fight. After what felt like two minutes, two kids broke up the fight and we both got sent home for two days. I thought the fight would make the boys back off, but when I got back to school nothing had changed. For the next year and a half I felt that I was going through a maze, no matter where I went at school I could not escape being picked on because I was gay.

There were six gay kids at my school at the time, three boys and three girls from GLASS. The other gay boys were also getting harassed. They wouldn’t say anything; they’d just roll their eyes and ignore the kids. But something inside of me had to prove that I was not afraid of them. I had so much anger from my past. Growing up I had to stand up to a lot of people, like my family and foster parents who didn’t treat me right, so I did not feel threatened by anyone. When someone would call me a name I’d say something back like “f— you!” or “Shut the f— up!” We’d get in each other’s faces and argue and get in-school suspension.

He taunted me under his breath 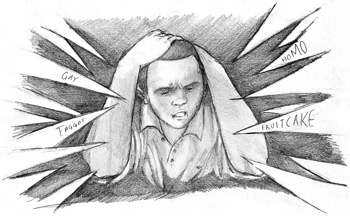 
One day a boy who was always saying stuff was on the other side of the classroom and I heard him say “faggot,” “gay boy” and “fruitcake” over and over. When I looked up he would look away. The teacher said to him, “Get back to work.”  But the boy kept calling me names so I said “Shut the hell up” and he whispered under his breath “fag.” I was so mad I picked up a stapler off the teacher’s desk and hit his arm.

Instead of suspending me, the teacher sent me upstairs to the conference room for the rest of the day. I felt that he knew that I knew what I did was wrong, but being on in-school suspension was enough punishment because I was being teased every day, and he was trying his best to keep me from getting into trouble at school and at home.

When the teachers caught the boys picking on me, they sent them to the dean’s office and gave them in-school suspension. But they would catch them only some of the time. My counselor helped, too. She would talk to them and at first they would leave me alone, but a couple days later they would bother me again.

During lunch and sometimes during class I would talk to my teacher’s aide, Michelle. I felt comfortable around her because she could always tell if there was something wrong with me and she would listen. When I talked to her about the teasing and said that I was getting tired of it, she would tell me that the teachers were doing all they could to make the name-calling stop. It seemed like the teachers were taking small steps, but still, it wasn’t enough.

Others before me had fought for gay rights

I started to hate all the boys. Sometimes I wished that I had never come to my school. Then a few months later my group home showed us a movie about the Stonewall Riots. Back in the 60s, police officers in New York would go inside gay bars and beat up gay and transgender people and arrest them just for being gay. Lesbian, gay, bisexual, transgender and queer (LGBTQ) people got tired of all the madness. They felt they deserved the same respect and rights as everyone else. So in 1969, they protested and fought against the police and started riots. Seeing what they had to go through to demand respect, that’s what I felt I was going through, having to fight for respect. Watching them standing up for their rights, I felt I should do the same. But what I’d been doing, standing my ground by going to a teacher, wasn’t working.

One day during elective this boy said, “fag.” I got out of my chair and flung some checkers in front of him. Then I walked out of the classroom and went upstairs to talk to my counselor because I was fed up. I felt like I was inside a videogame and whoever could make me go off the most wins. I told her about the other boys bothering me. She said she would talk to them.

It seemed to help. Two weeks went by and no one said anything to me. Then two or three new kids came to the school. The new kids started talking mess and saying their little remarks, too. One of the new kids said to my friend, who is a boy who dresses as a girl, “Man, that’s nasty.” We exchanged words and got into a fight. Next thing I knew I was getting carried out of the classroom by the teacher.

A week later, Christina, one of the staff at my after-school program for the kids at GLASS, asked how school was going. I told her about all the things that were going on. I hadn’t told the staff at GLASS because I didn’t think GLASS could do anything since it was a school issue. She said gays and lesbians have rights. She said that what was going on was called sexual harassment and that I could press charges against the kids, or on the school if the teachers and administrators weren’t doing anything about it. She gave me a paper that listed what qualified as sexual harassment, such as touching someone who doesn’t want to be touched, talking to somebody in a sexually inappropriate way and saying inappropriate things. Having that paper in my hand made me feel empowered.

At school the next day I showed my counselor the paper. She was very supportive. She had two police officers come to school and talk to the kids about sexual harassment. As soon as the officers said that gays could press charges, all the kids stopped goofing off and listened. It made me happy to see the looks on the boys’ faces. It was like I was finally getting back at them, but in a different way. The next week, the staff at my school came to each classroom and announced that if anyone was caught sexually harassing someone, they could be suspended, expelled or have charges brought against them.

Things didn’t change overnight, but they did eventually get better. The kids didn’t get the point until the administration started sending kids home and they saw the school was serious. It took about three months for everyone to come around and when they did, everything was cool. The boys began to talk to me. They even started calling me their homeboy. At first I thought, “Is someone trying to play a joke on me?” but they kept on saying it. After awhile I let go of my anger and decided that I was going to give this a chance and get to know the other kids. I thought that if I stayed mad, I would keep them mad and there would have been no point in going through all that I went through to make a change. I thought it would be a lot better if they got to know me and the other gay kids because then they would know that it was OK to be friends with someone who is gay.

Gay or straight, we had a lot in common

We started to hang out at school and at the park during P.E. We would talk about what we did over the weekend and what we were going to do the next weekend. Being gay doesn’t make me any different from other kids. We all do the same things, like go to the movies and the mall, so I had a lot in common with most of them.

Now they are my homeboys. Sometimes we slap box (play fight). They hang out with us at the bus stops. We show them photos of us and our gay friends. I feel more comfortable knowing that I’m accepted. I do things I wouldn’t do before, like wear a rainbow necklace or bring pictures of myself with my boyfriend.

I used to think they were savages, but now that I’ve gotten to know them, I see that they are different people than they were before. I think they were acting like that because they thought somebody would say that they were gay if they hung out with us. This goes on everywhere and it’s unnecessary. Why care if somebody thinks you’re gay or not? If you know you’re not, you shouldn’t care about what other people think. If they want to make a big deal about it, then that’s somebody you shouldn’t be hanging around.

The school has gotten a lot of new kids since then, but everyone gets along now. Some people say things here and there but the teachers are on it right away, telling them that it is not OK and sending them to the dean’s office. I know that things are not going to go back to the way they were. I’m glad that the kids at school can see the gay kids for who they are.

When I was younger I felt that everyone was my enemy. Now that I’m older, I know that not all straight people are bad. A lot of people support me, like the staff at my group home, and not all of them are gay. The same with the kids at school. They hang out with me and they’re cool. They’re not bad people.

I feel good about the changes at my school. I am not happy about how long it took, but I’m happy knowing I can come to school without being picked on. Everyone should be given respect no matter who you are, how you look or how you act. You can’t judge someone just by the way they look. You have to get to know them.

How to stop harassment

• Tell an adult at your school that you trust, such as a counselor or teacher. Also report the harassment to a school administrator.

• Tell your parents. Parents can be good advocates by calling the school and communicating with principals and other adults on an adult level.

• Write down everything that happened. You may have to tell your story to several people and it may be easier to remember what happened if it is organized and written down.

• If you are an LAUSD student, you can contact the Educational Equity Compliance Office at (213) 241-7682 or educ‑equity@lausd.k12.ca.us. The office can work with the school or contact the local district office to make sure your complaint is addressed.

• If these steps don’t work, file a complaint with your school district.