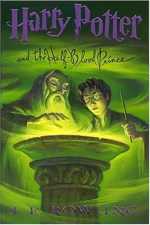 Ever since I won a raffle in fifth grade for a free ticket to see the first Harry Potter movie, I’ve been what my friends call a "Harry Potter freak." I have the entire series, including two books that came all the way from England. So I was pretty disappointed when I couldn’t get a ride to the midnight party in July where Harry Potter fans awaited the sixth book, Harry Potter and the Half-Blood Prince. I bought the last book on the shelves the next day at 9 a.m. I was pretty excited when I got home and I was extra careful to make sure I didn’t get any stains on it. I finished it in about eight hours. It was worth the wait.

Once again, J.K. Rowling gives us another page-turner. London’s bridge has fallen down. Who’s to blame? There’s a tornado—even Mother Nature is mad. Could this be a coincidence or is it somehow connected to the rise of the Dark Lord, Voldemort? We take another step into her magical world of witches, wizards and the Pensieve. But with good always comes bad and once again Voldemort and his Death Eaters are after the "Chosen One."

Back for his sixth year at Hogwarts School of Witchcraft and Wizardry, Harry is still coping with the death of Sirius, his godfather. Harry, Ron and Hermione are older, but older doesn’t always mean wiser. Love is in the air and when teens flirt there are consequences. Is Harry over Cho because he is getting a crush on Ginny? Will this affect his friendship with Ron, who is Ginny’s big brother and very protective, or is Ron too caught up with his new girlfriend?

With a new teacher who loves having favorites and the help of the mysterious "Half-Blood Prince," Harry gets better at potions. But Hermione has a suspicion that this "Prince" may not be all that he/she seems to be.

Meanwhile, Harry is taking secret lessons with Professor Dumbledore and soon learns of Voldemort’s past. As he looks for artifacts that are somehow connected to the Dark Lord, maybe Harry needs a little more luck.

I believe that Rowling should have had a warning for her younger readers. The characters are getting into darker situations that aren’t suitable for all her readers, like when two of them are "kissing fiercely." I think it’s cool that her characters relate to ordinary teens—they have first crushes and first kisses. But what about the readers who aren’t teens yet? I’ve always had a thing for cheesy romance novels, just don’t put it in the Harry Potter books.

This is my fourth-favorite book in the series. My favorite is Harry Potter and the Goblet of Fire. With mermaids, dragons and a sphinx, who wouldn’t love it? This book has a good plot but it needs more action, although I must admit I was pretty shocked at the ending. It may not be as exciting as the other books, but it brings the story together. It’s like this big puzzle. There are only a few more pieces left and they are in book seven. I’m already excited about it.

With the funeral of an important character, this is another treat from J.K.R. that you won’t be able to let go. Unless you’re totally against romances, then you might have to skip a few pages.