Most girls I know don’t like anything about P.E., except hanging out with their friends. I hear them complain all the time. “We don’t have enough time to change into our clothes.” “I smell! I hate P.E.” Or “This is a waste of my time.”

I understand why they feel that way. We should have more than three to five minutes to change our clothes. And being sweaty at school is gross. But I disagree about P.E. being a waste of time. I think it’s important because we get exercise, which helps prevent obesity. According to the national Centers for Disease Control and Prevention, more than a third of American children and teens were overweight in 2008.

But even though now I think exercise is important, I didn’t always like it. About a month into seventh grade, our teacher told us we’d be running the mile, which was two laps around the school. I liked sports, but I didn’t like running. Running non-stop was difficult, and I had never run that far before. To get an A the girls would eventually have to run the mile in 12 minutes and the boys in 11 minutes. I didn’t think I could do it.

The first time I had to run the mile I hated it. The first lap around the school was OK, but during the second lap I felt like I couldn’t breathe. Toward the end I gave up and walked. I didn’t finish in time and neither did my friends. Our teacher told all of us who failed to keep trying and we’d get better, but I didn’t believe her.

I hated P.E. for the next couple months. I wanted my parents to write me a note saying I was sick so I would be excused from P.E., but I knew they would say no.

Even though I didn’t like it, I got faster running the mile. I wanted to get an A in P.E. so I learned to keep going no matter how much I felt like someone was punching me in the stomach while I was running. By the winter I had my time down to 12 minutes and I could see that running was good exercise. For the rest of middle school I liked P.E. It got me into the habit of exercising so I even stayed active in the summer. I roller skated, played tennis and did yoga. 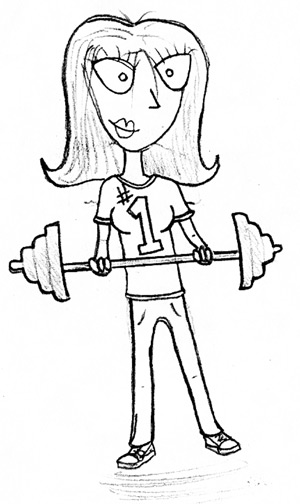 When I got to high school, I found out our school had replaced regular P.E. with a program called Play Out Loud. On the first day of Play Out Loud I went with some of my class to the basketball courts. I saw four long, thick ropes on the ground attached to the base of a wall and some things that looked like buckets with handles on them.
My principal showed us what we were going to do. He picked up a rope in each hand and started shaking them to make the ropes look like snakes. It looked pretty easy. Then we got in lines and I watched the girls ahead of me shake the ropes for 15 seconds. They were complaining that the ropes were heavy.
When it was my turn I grabbed a rope in each hand. The ropes really were heavy and it was hard to start. As I kept going, even though I wasn’t trying my hardest, my arms started feeling tired. I understood why the girls were saying this was so hard, but my competitive side wouldn’t let me be the only one who gave up. After shaking the ropes up and down, we got in lines again and shook them from side to side and then we did other exercises with the ropes. These were hard, too.

I didn’t work as hard as I could have

Next we did an exercise with the weighted buckets. Our principal showed us the correct way to do the exercise, which meant bending your knees when you caught the bucket. We stood in a line about four feet apart from each other. The first person grabbed a bucket and threw it to the second person and so on. Compared to the ropes this was easy. I could catch and toss the bucket without even having to bend my knees.

We were out there less than an hour. I thought it was fun but I felt I didn’t get much exercise. I thought that if we ran two or three times a week that would be a better workout.

The next day a few of my friends complained that they were sore. I realized that Play Out Loud could be good exercise if I did the exercises exactly as the principal had shown us, like bending my knees more when we did the bucket toss. I wanted to feel a little bit tired after the workout.

Since then when we’ve done Play Out Loud I’ve done the exercises the way the teacher showed us and I felt tired after we finished. But I’ve seen some students slacking off. They are the ones who complain the most about P.E. If they put in the effort I think they would see that P.E. can be a great workout and some of them might like it more.

P.E. helps get students in the habit of exercising regularly. Without P.E. some teens wouldn’t get any exercise and if we’re not active as teens, there’s less of a chance that we’ll exercise as adults. This can lead to becoming overweight and other health problems such as diabetes and high blood pressure.
Even though I don’t like being sweaty in class after Play Out Loud, it’s worth it because I get exercise and burn some calories.