Before this past summer, I had only ridden the bus in Los Angeles twice. When the L.A. Youth editors asked me to write about the new Expo Line, which is near my house on the Westside, I was excited. I’d never ridden a light-rail train or even heard of the Expo Line before. I wasn’t sure what to expect. Funny enough, when trying to get home from L.A. Youth after agreeing to write this story, I accidentally got on the wrong bus, and I spent an extra three hours traveling downtown and back.

However, I wasn’t discouraged. I recruited my older brother, Justin, a college student who was home for the summer, to come with me.

The day before going, we looked up the Expo Line online at metro.net. We found maps, a schedule and a useful “Destination Guide” that told us about the different attractions at each of the 12 stops. We also looked up the cost. It was $5 for a day pass (which gives you unlimited rides), but you are also required to purchase a TAP card for $2. When I rode the Expo Line two months later, the TAP cards had been lowered to just $1.

Around noon we parked for free on a residential street near the Culver City station on Robertson Boulevard. However, there is also a huge free parking lot at the station that we didn’t know about. The Expo Line runs along Exposition Boulevard and connects Culver City to downtown. After purchasing our TAP cards, my brother and I went up the staircase to wait for the train.

The Expo Line’s stations are incredibly nice. The Culver City stop is elevated, so I could see the bell tower of my high school. The stops were all clean, and the metal incorporated into the architecture made the stations feel polished. There are plants, and each stop has artwork that was commissioned for the Expo Line. I was impressed. 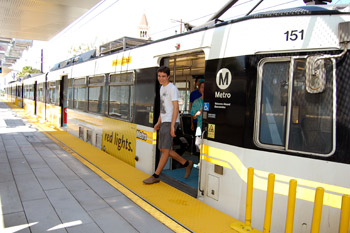 About five minutes after arriving, our train pulled in. The trains themselves are not as amazing as the stations. Their exteriors are old and scratched up. Luckily, the interiors were relatively clean and the seats are the same as bus seats.

However, what the Expo Line trains may lack in looks they make up in efficiency. Soon after we sat down it sped off, and the time between stops was just a few minutes each.

On the train, we looked over the Destination Guide we had printed (they are available in the train cars too). The California Science Center caught our attention, and my brother was also interested in seeing FIDM (the Fashion Institute of Design & Merchandising).

We got off at the La Cienega/Jefferson stop. We went to look at some of the unique architecture nearby, like the Samitaur Tower, which my brother had read about recently. It looks like a series of discs and cones stacked up, and it curves and protrudes at weird angles.

We got back on the train and rode to one of the two USC stops. We went to the California African American Museum (admission was free). I had never been there and I had assumed it was a history museum. However, I was surprised to realize it was an art museum that focuses on African American artists and history. The most interesting exhibit was one that featured artwork by high school students. There was one piece that fascinated my brother and me. It was a huge drawing of an overweight teenage boy on a toilet, staring at the viewer with a look of mild surprise. We had no idea what it was supposed to mean.

The science center was as fun as when we were kids

After leaving the museum we went to the California Science Center, which is next to the African American Museum. Admission was free here too. We had a blast seeing all the stuff we remembered from when we were kids, such as the Drunk Driving Simulator. I tried the Hurricane Simulator, but I felt less like I was in a hurricane and more like I had just rolled down the windows in a car. I noticed that we were at least three times older than the average person there, but we still had a great time.

We traveled to the Pico stop to go to L.A. Live. We took pictures of ourselves at Staples Center posing with the statue of former Lakers announcer Chick Hearn, and then we stopped by the ESPN Zone to play arcade games.

Finally, we boarded the Expo Line again and rode to the last station on 7th Street, where you can also transfer to other rail lines. My brother insisted we visit FIDM because he wanted to see the campus. We ended up at their scholarship store, where they sell clothing and use the money to fund educational scholarships. We browsed a bit, and my brother acted as a model for a man trying to pick out a tie for a friend.

It was now 5:30, and we were ready to head home. It took only 28 minutes to ride back to Culver City. I didn’t think it was possible to go between downtown and Culver City that quickly. My parents had always complained about the time it took to get downtown whenever they had to take me there, so in my mind downtown had always seemed really far away.

Recently, I went on the Expo Line again with some friends. It was fun to go to a different part of Los Angeles than we would normally. I think it’s a great addition to the city.

l
Other stories by this writer:

Creating my own comics. Making comics started as a way to fight boredom in math class, but it’s become something Austin loves. (January – February 2012)