It figures that only months after I get my driver’s license, a cheap and less stressful mode of transportation arrives only blocks from my house. I find the timing interesting because the new Gold Line train, which opened in late July, is just as good a way to get around Pasadena as my car.

First, not having to pay for parking is a huge plus. Second, with 13 stops the Gold Line provides a variety of destinations within walking distance. And there are plenty of opportunities to travel elsewhere from the stations on the bus. No more do I have to sigh: "I can’t. No car, no parents," and turn down my friends’ proposals of meeting somewhere in the city or even just at their houses.

For the past 23 years, a group of planners envisioned a line that would connect Pasadena and Los Angeles more effectively than our reliably unreliable freeway system. Construction began in 1994, with intentions of opening the line in 2001, but complications including meager funding suspended construction in 1998. Finally, a solution was found and building resumed, and the $880 million project opened July 26. 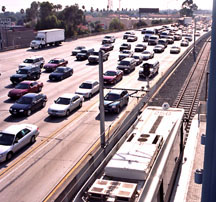 But what does this mean for us? Going between Pasadena and Los Angeles hasn’t been a common plan for most teenagers because of traffic and parking. Heavy traffic can easily discourage nervous, new drivers from using the freeways. What’s more, being stuck in traffic is no teenager’s idea of freedom. Parking is often difficult to find, especially in popular shopping or entertainment areas, and it can be tricky and expensive.

Another great thing about the new light rail is it takes less than 40 minutes from end to end. Driving from my house, which is near the end of the Gold Line, to downtown Los Angeles usually takes about an hour, often longer coming home. And a round trip is relatively cheap ($1.35, not including any transfers) and runs every 8-10 minutes. It’s open from about 4 a.m. to about 2 a.m., which allows for late returns from concerts downtown, midnight movies at South Pasadena’s Rialto or just a late night of movies at a friend’s house. Now parents of non-drivers don’t have to stay up, waiting to pick up their kids (though they may stay up to make sure we come home!).

For many Pasadena teenagers, not a week goes by without a few hours spent in Old Town Pasadena or the Paseo shopping complex. Well, the stores don’t change very often, and neither do the people who go there. If you can name each of the stores from east to west, you’re not alone in your miserable boredom. The Gap, J. Crew and the Banana Republic aren’t as diverse and exciting as we like to fool ourselves into thinking. But now, perhaps after seeing a movie, anyone can decide to get dinner in Chinatown, or go all the way to Union Station, then take the Red Line to the Wiltern for a show. I have taken the train from the Pasadena Library to Olvera Street, just to get a change of scenery. It didn’t take long, and I only had to walk a few hundred yards to get to and from the stations.

On one of my first rides, I found that it works both ways, too. I met a friendly group of people from L.A., just as enthusiastic about the Gold Line as I was and who weren’t that familiar with Pasadena. As I recommended they go to California Pizza Kitchen and a jazz festival near the Memorial Park station, I realized that the Gold Line can take people from downtown to almost anywhere. There are two different parks (Central and Memorial) where music festivals are common, three areas for shopping, the library and some of my favorite restaurants and coffee shops, such as Soda Jerk’s, Buster’s and Starbucks. Throw in another quarter for a transfer and anything’s possible. To see how to get places using public transportation, use the Metropolitan Transportation Authority’s online trip planner at www.mta.net.

The Gold Line will also serve even more practical purposes for commuters and students who can’t or don’t want to drive every day.

"I might use it when school starts to come home after school on some days," said Mary King, 16. She said that her school in Pasadena isn’t far from the Fillmore Station. I envy her, because the trains run frequently enough that she can decide when to go home, instead of being tied to a certain pick-up time. The trains are also relatively quiet and run smoothly, a peaceful way to come home after a long day at school. Or work, for that matter.

The MTA hopes that the Sierra Madre Villa station will link commuters from beyond the eastern reaches of Pasadena to their jobs in L.A. To serve that purpose, the parking lot can accommodate about 1,000 vehicles. This, some hope, will reduce rush-hour congestion. If you ask me, those 1,000 cars won’t make much of a difference in terms of traffic, but re-igniting interest in public transportation will certainly be better for our infamous air pollution. Many bus routes in the Pasadena area have been altered or added to add more stops near train stations. The Pasadena ARTS buses, which are less expensive but less abundant, are also going to be available, with two lines added to the system.

The stations themselves serve to make Pasadena more beautiful. Each of the stations features the work of a local artist, whose sculptures or images are supposed to represent Pasadena or the Gold Line. From portraits on color-changing glass to weather vanes, the artwork gives each station a unique "look." Some sculptures were inspired by the structure of the stations or by the history of railways in California.

Students can apply for discounted monthly passes at http://www.mta.net. These cover buses and trains.