When I was a young girl I was so obedient. I went to church with my parents. I had straight As. I paid attention to older people. My friends did not smoke, drink or get into trouble. I was a Jehovah’s Witness just like my family. I understood the ideas and rules of the religion, like not worshipping Jesus because Jehovah’s Witnesses believe that Jesus is the son of God, not God, and we should only worship God. I followed the rules, like not celebrating birthdays and holidays. I also went preaching every morning. By seventh grade I felt really left out, like the world was having a really great time and I was stuck with the party poopers.

Then some of my friends asked me, “Why don’t you celebrate holidays with us?” I thought for a while about how kids were getting birthday presents, while I was getting up at six in the morning to go door to door to preach. You know how when you wake up you feel grouchy and you want to curse out the person who woke you up? Well, that is what people used to do to us! It was also embarrassing knocking on the doors of people I knew because they would laugh at the way I dressed. I was dressed in church clothes and most of the people my age would not wear dresses and shoes with low heels. Also, going to church three times a week was taking up too much of my time. So I started to find myself. Instead of putting church and family first, my friends became my priority. I wanted to have fun, even if my parents didn’t like it.

The make-up I started to wear was awesome. I wore eyeliner from the ends of my eyes all the way to my eyebrows so it looked like a cat. I was influenced by a friend but everything else, like putting on red eyeliner, was my idea. People stared at me at school. My parents, of course, didn’t like my make-up because supposedly it brought too much attention. I liked the attention, no matter what they said.

I listened to music the church did not approve of, punk bands like The Exploited and Rancid, and ska bands. The church would have sermons about how evil music is nowadays, and how it leads to suicide. My parents thought my music was for crazy people. But I didn’t care what they thought. Music meant a lot to me because that was where I turned when my parents didn’t let me talk on the phone. I liked to talk for hours and hours with my friends about upcoming shows that featured local bands and places where we could go and chill.

I quit the religion at the start of eighth grade. I stopped going to church. When I told my parents, they cried and tried forcing me to go. It was really important to them because being a Jehovah’s Witness runs in the family. I also started giving gifts to people on their birthdays because I thought that birthdays should be celebrated.

Later in eighth grade I became really depressed because two of my friends committed suicide and my boyfriend left me. It really hurt when my friend committed suicide because the only reason I went to church was to hang out with her. I started smoking a little weed and drinking. I even got arrested for stealing a couple times.

I started wearing only two colors: red and black. These colors represented Emily Strange, a cartoon character who is a 13-year-old girl and one bad kitty. She has long black hair with bangs, a short black dress, black stockings, big white Mary Jane shoes and four black cats. Emily is anti-cool, a subculture of one, and a follower of no one but herself. Her favorite phrase is “get lost,” which is both an invitation to travel to unknown places and an instruction to “take a hike.” In ninth grade I looked exactly like her so people started calling me Emily.

I did what I wanted

I also wore red and black because I believed those two colors showed anger and darkness. I wanted to express those feelings because I was never allowed to show my anger before. I wore red pants with chains, spikes and things that my parents thought were for dogs. You know, clothes that stood out. I also pierced my eyebrow and ears. Wearing these clothes I went to gigs and had fun. My parents tried to stop me from all that. They tried to stop Emily. But I went to gigs anyway by running away. Once, I did not come home for two weeks. My friends at the gigs meant the world to me because they were always there when I needed them.

I barely passed the eighth grade. When I went to Fremont High School everything was going smoothly until my friends started influencing me to do drugs more than I usually did. I also was still drinking beer because I felt that it could help me get rid of my problems with my family. I was taking anti-depressants, and that mixed with alcohol was a really bad combination because it really messed me up. I didn’t go to school much. When I did go, I would get into fights because I gave people attitudes. One day I got into a fight with a chick over a guy and got sent to Venice High.

I learned a lot of things at Venice, like how to smoke pot and not get caught. The only class I went to was my art class because I loved it. Art was the only thing that caught my attention, but it didn’t catch it enough to get me away from all the drugs. I was addicted to weed.

By then I was totally messed up. I felt nobody could help me get out of the situation I was in. I’d come home smelling like weed or beer. I would leave home and not come back for days or I would come home after my curfew. When I ran away from home or made my family cry, my oldest sister would say, “You’re the family’s mistake” and “Why do you make us go through hell?” That really hurt me. My family also would exclude me by saying “You are not part of this conversation” when they were talking.

I was also depressed so my parents put me in The Linden Center, a school for students with emotional problems. Two months later I turned my pipes, lighters and rolling papers into the teacher because I wanted a fresh start. My parents were embarrassed when the school called them to say that their youngest daughter had been caught with drug paraphernalia. I was barely 14 years old, to make matters worse. Right after that I quit doing drugs and started to go to Alcoholics Anonymous meetings.

Around this time my school wanted to put me in a group home to help me, and my parents agreed. Over the summer, I had a parent/teacher conference where I was told I was going to a group home. Because of strict rules, I would not be able to go to gigs or even go out with my friends. Worst of all I would have to live with five other girls. I started yelling at my parents, telling them, “You hate me” and “All you want to do is get rid of me.” That weekend I took my friends out for pizza and told them. They were really sad at the thought of me, Emily, leaving the scene.

When I went to the group home I did not like it at all. I had plans to go to the Warped Tour concert and I was crying every night, telling myself that I was going no matter what. But I was scared that if I did go then my dad and brother might take me away in front of my friends. Or even worse that the police might stop the show to take me away.

Just like a few months before when I ran away from home to go to this really important gig and my dad and my brother showed up. My dad was holding a belt ready to beat me and my friends were about to get into a fight with him. I was so embarrassed. I didn’t know what to do. I just started yelling that if they laid one hand on my friends then they would never see me again. My brother calmed me down after about 30 minutes and I left with him in the car.

Since I was at the group home, I took advantage of being able to celebrate Halloween for the first time. My parents were surprised when I told them I had bought a costume. They told me, “You know who is watching you, GOD! So you better watch what you are doing.” I dressed as a glamour girl with a long black wig and a strapless dress with feathers. My friends were Lucille Ball and a folklórico dancer (a Mexican folk dancer). We had a great time goofing off. I had fun, but it was totally against my parents’ will.

At a parent/teacher conference in November, my parents wanted to separate me from my boyfriend because he is not part of our religion. In the Jehovah’s Witness religion you are not allowed to marry anyone outside of the religion. My parents also thought he was the one keeping me from focusing on leaving the group home and coexisting with my family. It felt like nobody wanted us together, but being with him was the only thing making me happy at that moment. About a month later, my parents finally came around. They have learned to accept us dating because they don’t think the relationship is going to last. 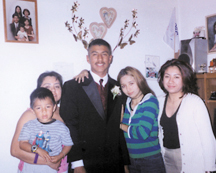 At this point, I am in therapy with my family. There we are learning how to accept each other by making compromises that are reasonable for all of us. I go to church once a week to make them happy, even though I hate going because it is so boring. I told them I would go only if they let me go to a gig afterwards. When I go to church I dress in really outrageous outfits like a polka-dot dress with skanking shoes (for dancing to ska music), or a black dress with really dark make-up. Even though I’m still going to the Kingdom Hall (church), that does not mean I’ll change back to the Jehovah’s Witness I used to be.

Besides going to church, I am also getting along with my family better and that has made them a lot happier. In return, I get to hang out with my friends for about three hours a week. I also help out around the house and they give me money to go shopping.

But the greatest thing I am getting from my family right now is their trust, like letting me go to a gig by myself while my dad waits in the car. Before, they would not let me go to gigs because they thought I would get into drugs again. My parents decided to give me that big gift because they noticed that I want to change for the better. Why did I change from the person I want to be to the person that my parents approve of? Because come on, I am their disappointment. I didn’t like the feeling of being left out of the family. I want to be left alone to be myself but not left out. There is still a bit of Emily in me and I won’t let them take her away.