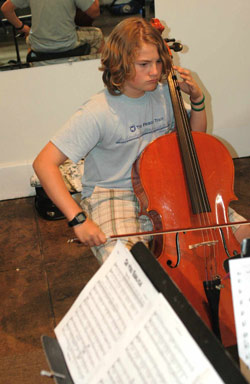 
When I was in middle school, I wanted to play rock music on my cello, but I never really got anywhere. I would sit in my living room and try to play simple songs, like “Iron Man” and “Smoke on the Water.” The side of my cello was covered with scratches from playing it with a guitar pick (I now have a new cello). I could figure out little bits of my favorite songs but it wasn’t very satisfying, because I could only get the main riff. I’d give up. It didn’t sound like the song.

I wanted to play more than just the classical pieces my school teachers told me to play. I liked rock—AC/DC, Queen, Led Zeppelin—and that’s what I wanted to play. I was drawn to rock because of its roots. I grew up listening to the blues, jazz and early rock n’ roll, and rock has roots deep in all of these kinds of music.

Then one day my dreams came true when two professional musicians, Robert Anderson and Jacob Szekely, came to my middle school last year and played a mini concert for my orchestra class. Robert plays the violin and Jacob plays the cello. They played like I had never seen anybody play classical instruments. Well, “classical instruments” is a bit of a stretch. Robert was playing a top-of-the-line Jensen electric violin and there was so much equipment and so many cords, that it was mesmerizing. They played with effects and distortion in a way that I thought only guitarists could play. I was sold by about the third note.

Robert and Jacob opened String Project Los Angeles, a studio in West Hollywood for string players to play rock, jazz, funk and hip-hop—almost like the School of Rock for violin, viola, cello and bass. When they were around my age, they wanted to play rock, jazz and funk music on their classical instruments, but they had no way to play the music that really interested them. Bach is great and all, but it can’t possibly be as much fun as Jimi Hendrix or Guns N’ Roses.

I was finally rocking out

My first experience with String Project was a one-day Hendrix class last year. I’ve always loved Hendrix and to play his music myself just seemed divine. We learned “Foxey Lady” by Hendrix. It was an amazing experience. They gave us some background on Hendrix and the sheet music for “Foxey Lady.” They taught us techniques commonly used by guitar players, such as bending—how to slide between notes instead of playing two separate notes to get a different sound. As I sat there with another newcomer, I was surprised at how much I could do. Just a couple hours later I was jamming to the music of arguably the greatest guitar player ever.

I went back to String Project at the end of the summer for a new weekly class called Alternative String Group, which was even better. The alternative group included teens in middle school and high school. We played “Sweet Child O’ Mine” by Guns N’ Roses, “Yellow” by Coldplay, “My Cherie Amour” by Stevie Wonder and songs by James Brown and Ray Charles. We even got to play a full concert along with some professional guest musicians at one of L.A.’s famous jazz clubs, the Jazz Bakery in Culver City.

A lot of the music is easier than what I play at school in orchestra, but we have to learn how to groove together as a group. Although we’re reading sheet music, we’re able to feel each other’s playing and follow each other even if we take a detour with the song. To sound really good, it takes a lot of work. It took me a while to learn how to do that but now it feels like second nature.

I have learned a completely different way to play and the music isn’t as rigid as orchestra music. There isn’t as much classical technique, but we learn things that any musician who wants to play music besides classical music needs to know. For instance, we learn how to follow the form of a jazz piece, what to do when another musician is soloing and a whole slew of jazz and rock vocabulary. We also get to improvise (making up music as you go). I love improvising. It gives me freedom and it’s really fun. You can’t just play whatever you want though. One rule is that you have to play in the same key as the music.

I returned for the fall semester. We played even more great music including songs by U2 and Jay-Z, and we played “Foxey Lady” by Hendrix again. I got to play a Yamaha electric cello, one of the coolest instruments ever. The electric cello looks a lot like a traditional cello with a neck and strings but instead of a body, there’s just a wooden outline of one. An electric cello allows you to play louder, use effects like distortion, and it looks cooler. Now that I was shredding (a rock music term associated with fast excited guitar playing) with the same effects as Hendrix, had a lot more experience, and was playing with other stellar students, the music only got better.

We played at the Jazz Bakery again in January. This time the concert was a lot bigger, with more performers and special guests. We had a DJ for the hip-hop songs and a percussionist for the other music. The place was packed. The crowd loved the music and cheered loudly after each song and unlike at a classical concert, during each song. It was cool to feel a connection to the audience.

I plan to continue going to String Project and I think it will expand. And I’ll continue playing in my school orchestra because I still like classical music.