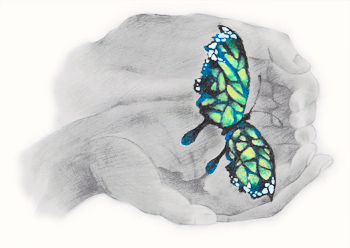 I haven’t always been the nicest person. I used to scream at and hit my mom, didn’t do what I was told and I didn’t get along with most people. Thinking about how angry I was back then is scary. Now I don’t think I’m anything like the person I used to be.

When I was a baby I was taken from my mother because she abused alcohol and lived on the streets or with random guys. She couldn’t take care of me. I was put in the foster care system and I lived in five foster homes by the time I was 6 years old.

I lived with a woman named Lori for about four years, but one day my social worker came to pick me up. She told me I was moving to another foster home to be with my little brother. I was hurt, angry and scared. I loved Lori. I didn’t understand that she wasn’t my real mom. I’d lived most of my life with her and I didn’t want to leave.

I went to live with my brother’s foster mother. During the year I lived there, one of her relatives sexually and physically abused me. He told me, “This is between us and if you say anything you won’t have a brother and a family.” So I didn’t tell anyone. But at a court hearing to check on how things were going, I did tell a judge that I hated living there. We were moved to a new foster home that day.

A few months later, when I was 6, my brother and I started visiting a couple who wanted to adopt us. We would visit them on weekends. I liked them and the idea of being a part of their family. My brother and I moved out of our foster home and in with them a few months later. My brother and I called them “Mom and Dad.” My mom would read nursery rhymes to me before bedtime. We would say a prayer and she would say, “Good night, buenos noches.” We did things as a family, like game night. This was the first time that I felt like I was someone’s child.

But even after they went to court to make the adoption official, I still felt that I would end up moving again. Promises had been made to me before. Lori told me I could live with her forever. Why would this be any different?

Although I felt welcomed at home, I was constantly battling my mom. I’d get upset over little things. My mom would tell me to do my homework, clean my room or brush my teeth, and I’d go off and yell at her. Sometimes my mom would have to hold me down until I was calm. Other times I would explode—yell, bite, hit, kick—anything I could do to let out my anger. I wouldn’t stop until I’d completely exhausted myself.

It wasn’t like my mom was trying to hurt me, or forcing me to do something awful. I was angry that she was telling me what to do. It wasn’t hard to upset me. I think I was always angry but I wasn’t able to talk about how I felt. It had to come out somehow and fighting was the only way I knew. My mom tried to help me by putting me in therapy, but it didn’t work because I didn’t like talking to the therapist so my mom did all the talking.

I didn’t realize how out of control I was

My behavior didn’t change, so when I was 11 years old, I was sent to an all-girl therapeutic treatment facility near Denver called Excelsior. I knew I was there because people thought my behavior was out of control, but at the time I didn’t think I belonged there. I thought being sent away was extreme and I felt as if my mom was giving up on me. I didn’t understand at the time how hard it was to live with me. They told me I’d be there six months to a year, but I ended up staying three and a half years.

When I got there I met one of the staff, Jim, who took me to meet all the kids I’d be living with. They said, “Oh, you’re Tiffany! We’ve been expecting you!” I was surprised because I did not expect everyone to be so nice to me. I thought they’d be mean because it was a treatment facility for kids with behavioral problems. This one girl came up to me and introduced herself. She told me her name was Ariel and that she was from Redondo Beach like I was. It made me smile because I had only been there for a few minutes and I already had something in common with another kid.

After a few weeks of living at Excelsior I didn’t really miss home. I talked to my mom twice a week and went home every few months.

Even though I’d left home, I didn’t leave my problems there. I still didn’t like being told what to do. I was always arguing and I would push limits to see how much the adult staff would put up with before I got into trouble.

At Excelsior there were harsh consequences when I didn’t do what I was told. I got in trouble two or three times a week for talking during class or not sitting at my desk. I’d get sent to detention or put in timeout where I’d have to sit in a room by myself. I think what helped most about timeouts was a lot of times there would be at least one staff around who I liked. They would talk to me and say things like, “It’s not like I don’t care about you. I don’t go home and forget about you guys.” They’d share their own experiences, or they would just listen to me. I would tell them what upset me. When someone listened to me, I didn’t feel ignored and I was less likely to be difficult at that moment. The punishments didn’t keep me from acting out again, but I usually got something out of talking to someone.

Another thing that helped me was the girls. Excelsior was the first place I made real friends. When I would get upset sometimes I would talk to some of the girls and they seemed to understand. One time I was mad and I was roaming the grounds without permission. When I came back some of the girls came up to me and said they were disappointed that I’d left and were worried and wanted to know what was wrong. I told them I was frustrated at the staff because I felt they were being rude. They said, “We’ve felt the same way too, but any time you’re frustrated you should just come and talk to us.” I felt better because they were there for me to let it out and they didn’t make me feel like it was wrong to feel the way I felt.

It wasn’t just the girls who were there for me. My therapist, Christie, went out of her way to help. When our sessions were supposed to be an hour, we would talk for two hours because she knew I needed it. She never seemed to judge me and I always left her office feeling happier.

More and more I found myself opening up and talking about myself and becoming closer to others. After a while I slowly started to accept that I did need others.

Christie helped me understand why I acted the way I did, and with that I was able to understand how I could change. I had to fill out a thought process sheet after every time I broke the rules like if I cussed or talked back to the staff. I would have to write what upset me, how I responded, what I could have done differently, and on a rating 1 to 10 (10 being the highest) how upset I was. I would think, “I can’t believe I did that.” It was helpful because I got a lot of stuff off of my chest and I wasn’t holding as much inside. Now I can stop myself from letting my emotions get out of hand and acting on them in the wrong way. If I get angry, I’ll feel angry, but also understand it’s really frustration because I feel like I’m not being listened to. And instead of yelling, I’ll stay calm.

Gradually my behavior started to improve and I followed the rules more often. The better my behavior was, the more privileges I got, like going with the staff and other girls to the movies, mini golf and restaurants. When I was finally allowed to leave the facility by myself, I felt proud. I didn’t have anywhere to go so I walked to the grocery store and bought my friend Jell-O because I knew she liked it.

My therapist, the staff and my mom felt I was ready to leave Excelsior and live in a place without as many rules. On my last day at Excelsior they threw a going away party for me. There was cake and ice cream and I spent the night hanging out with my friends and staff. All of my friends signed a journal, writing goodbye letters. My friend Alissa wrote, “It’s been fun having you here. You have come so far and I am really going to miss you I hope you do well outside of here.” As good as it was to read those things, what made it better was that I believed what they were saying. It made me feel good that I could see that change in myself. I was proud that I’d made choices to turn things around.

On January 27, 2009 the day before my 15th birthday, I came back to California. I moved into a group home in L.A. where I lived with staff and five other girls. The group home was temporary so I could eventually go home to my mom.

I was excited about being at the group home. It wasn’t as strict and the staff and the girls were friendly. I joked with the staff that Excelsior dealt with the “bad girl” and they got the “good girl.”

I moved back home in September. I haven’t lived at home since I was 10 and now I’m 16. Things are better. I don’t yell at my mom anymore. When we have disagreements we have discussions, like last month my mom and I talked about what school I should go to. I wanted to go to a less restrictive school that didn’t focus more on my behavioral issues than my education because my education is important to me. I was frustrated. I explained to her that I didn’t feel like it was what I needed. She told me that her options were limited, but that she would take everything I said into consideration. I felt good about the conversation because I felt like she was trying her best to understand where I was coming from and I understood where she was coming from. It made me feel more comfortable to talk with her in the future. It made me feel closer to her.

I’m lucky my mom sent me to Excelsior when she did. If I hadn’t gotten help, I would be a lot different now. I think I would’ve ended up running away from home or hanging out with bad people. It has been a struggle getting to be the person I am today. I am a loving, friendly, outgoing girl. I don’t think I am anywhere near done growing and learning about who I am, but I think that I have come very far.