People would pay attention to me if I were a boy 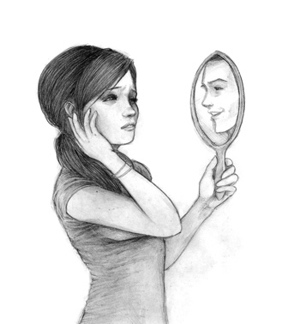 
It’s hard being the oldest daughter at age 14 when my dad is never home. And whenever he is, all my mom does is fight with him. I try asking others for help, including my family, but it’s like my delicate appearance just won’t let anyone hear or understand me. Life would be much easier if I were a boy.

If I were a boy, I’d be able to guide my dad closer to my mother’s heart. I would tell him what mom hates the most about him, but most importantly, I’d show him how to fix his mistakes. I would explain to my dad how bad he hurts Mom, and he would listen to me, his son. My dad would probably want to spend more time with me. We would talk about guy stuff, and he would no longer ask me what I made for lunch that day.

Things would be much easier as a boy because I wouldn’t feel like I’m competing about every little thing with all the other girls. If I were a boy, maybe then my parents would come to see me in at least one of my music concerts. Maybe then, as a boy, the other guys who play guitar would teach me something new instead of saying, “You can’t play that!” Maybe my dad would want to proudly watch me perform at my concerts.

I often feel helpless at home. Maybe because there’s no way I can run away or stop the world from turning. If I were a boy, I’d be the young man of the house and be able to set up some rules, like no fighting in front of my little brother and sister. Does no one pay attention to me because they think that just because I’m a girl, all I do is complain about everything that goes wrong in my life?

Life would be easier if I were a boy. The benefits would be spending more time with my dad, and getting more respect. As for now, I shall live like a ceramic doll whose lips are glued shut, hollow inside, but so ready to burst out in screams.

As a girl I’d want respect

To be honest I think that if I were to switch genders for a day, I would be lost. I like to play rough, get dirty and do things that women don’t typically do. I’m not saying that it would be hard, but I know it wouldn’t be easy.

I think that being a female for a day would be interesting. I mean I could cry when I want to, get my hair done, and get a pedicure without people thinking I’m gay or feminine. (Not that it matters to me what others think.) Really, it would be nice to just go somewhere and relax while talking about fashion and the latest gossip. You see, as a man I don’t do too much of that either. I’m training for football, playing basketball or working. Though there are those times when I look at my fiancée and say to myself, “Man, she’s got it easy,” I’d rather remain a man.

The thing I wouldn’t do if I were a woman for a day is date. I can’t stand the way most men treat their girlfriends. It’s just not right. A woman is supposed to be loved and cared for in a way that makes her happy. I’ve noticed that men fail to listen to their girlfriends. Men always want but never give. I’ve watched men dump their problems on their girlfriends but when she has something that she needs to talk about, her boyfriend has no time or doesn’t want to hear it. (Then they wonder why their relationships never work out.) I always listen to my fiancée when she talks to me. Even when she doesn’t want to talk about something that’s on her mind, I encourage her to. That’s how a partner is supposed to be, compassionate and understanding. Many men think it’s a feminine trait and it’s hard to find a man like that. For that reason, dating is not an option.

I think it would be much harder to be a woman than a man. I don’t think I’d like it too much. Don’t get me wrong, it has its positives, but I think I’d still prefer to stay the way I am.

Already one of the guys

If I were a boy, I think I’d be just like my brother. He’s a lot like me and I don’t think I’d change much if I were a different gender. I grew up around a lot of boys and still get along better with them now. Sometimes I even think my life would be a lot easier if I were a boy because I’m just like one of the guys. Being the youngest and only girl in my family and growing up with three god-brothers, I was born into the world with tons of guys around. I grew up tough like one of the boys because my brothers and I would constantly fight and roughhouse. I’m not a sports fanatic like the rest of my family, which is odd, but I think that’s one of the things that lets people know I really am a girl.

I wonder if I would still have the same relationship with my oldest brother and my dad. I’m very close with my dad and older brother, but they say that girls are usually that way—daddy’s girls. But if I were a boy, would we still be so close? I think if I were a boy, I’d actually have more girl friends, and be a lot closer to my mom, like my oldest brother is. I don’t think I’d be so tough, I think I’d be more girly than I actually am as a girl. Sometimes I laugh to myself because my oldest brother is heavily into sports, but will cry like a baby if anything goes wrong. He cries over his girlfriend, his cell phone, football games, EVERYTHING. And me, on the other hand, I don’t, at least not in a room full of people like my brother. I feel that if I were a boy, I would have to prove myself to them so they wouldn’t bother me.

If I were a boy, I think that I would be less popular. I think part of the reason I have so many friends is because I’m a jokester and I can take a lot of jokes, unlike a lot of girls, who might get their feelings hurt. But being that I’m a girl, it stands out more that I can take it. If I were a boy, it wouldn’t be such a big deal.

Since some of my closest friends are guys, when we go out, it seems like half the time they don’t even realize that I’m a girl. They’ll talk about their girlfriends and what girls they think are cute. I fit in just like one of the boys, so it’s hard for me to imagine what it would be like if I were a boy. I think I’d be more feminine, the opposite of what I am as a girl. I like being a girl, and still feeling like one of the guys, because I get the best of both worlds.


Next essay contest—What’s your biggest regret

We make decisions every day. Some of those decisions affect us more than others and many times we second-guess ourselves. Do you ever regret something you did or maybe didn’t do? What’s your biggest regret? Should you have asked her out? Do you wish you could’ve taken back what you said to your father? Do you wish you had spent more time studying or less? Describe what happened and why you regret it now. Looking back, what would you do differently? MAIL YOUR ESSAYS TO:

OR E-MAIL THEM TO: