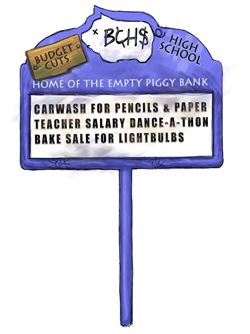 
The governor says he has to cut funds from schools because the state faces a $15.2 billion budget deficit, meaning it has more expenses than money to pay for them. This means school districts will get less money than they need to pay for teacher salaries, classroom supplies and programs. L.A. Youth writers interviewed their principals and teachers to find out how their schools plan to deal with the proposed budget cuts.

Next school year Kennedy High School will have six or seven teachers retiring. Principal Clark said, “We will replace some.” That means more classes will become overcrowded, but the principal doesn’t know by how much yet. One thing is for sure, Kennedy doesn’t need any fewer teachers. This year the average class size was 32 students. The classes with the good teachers are filled up. In my algebra class, there are more than 40 students. I have no desk. I sit in a chair off to the side. I feel like a vulture sometimes. The bell rings and I think, “Who’s absent? Can I get an empty desk?” Next year, will I even have a chair? I’m worried.
To see if supplies would take a hard hit, I interviewed teachers with classes that use a lot of material. Woodshop instructor Mr. Hazard, whose popular class runs all six periods, said the principal warned him that “this year was semi-bad but next year it’s extreme bad.” The class requires students to pay a lab fee but that alone cannot cover all the essentials. Mr. Hazard said there wouldn’t be money for glues, nails or screws without the school’s aid, and the old equipment won’t be replaced.
My school is recognized for its architecture magnet program. Mr. Kahlenberg, the architecture teacher, said next year he’s not getting the $1,500 he usually gets for supplies like paper and pencils. He will have to impose a lab fee for the first time and is searching for donations.
Javier Rodriguez, 16, Kennedy HS (Granada Hills)

A few months ago rumors began to spread about departments, courses and teachers being cut at Beverly Hills High School. I heard about the potential cut of the French department and that my dance company’s teacher would be fired and the program might be eliminated. Everything that excited me about going to school was rumored to be gone and I was upset.
It felt like the Beverly Hills school board didn’t understand what was important to the students. I made a speech at the board meeting in February defending the dance and French programs. More than 100 students showed up and defended their passions too.
Due to the large number of students, parents and teachers at the meeting, the French department has been saved. However, our dance company still doesn’t have a teacher. According to Mr. Bushée, a chemistry teacher and the president of the teacher’s union, the board has decided to cut an art teacher, two history teachers and one P.E. teacher at my school next year.
I know that the board has to make cuts. It’s not the cuts that are going to hurt our schools, but what they choose to cut. I feel as though teachers are more important than administrators. Although administrators are essential, we can survive with a few less. By cutting teachers you are cutting a student’s educational potential, and that is unacceptable.
Liana Gergely, 15, Beverly Hills HS

Class sizes at Leuzinger High School have already been affected. Classes have gone from an average of 36 students to an average of 41. Mr. Divinagracia, an instructional coach for teachers at Leuzinger, said this was done at the start of this semester to prepare for the budget cuts. Long-term substitutes were fired and their students were put into other classes. I think the district had not taken into consideration how hard teaching a class of 36 students was, let alone teaching 41.
When I spoke to Ms. Carriaga, an English teacher, she agreed that the frustration among teachers and students has gone up. With 40 students, a teacher is spending more time managing the classroom rather than teaching, she said.
For students who care (like me), more students in class means we learn less. Even I find it hard not to talk with others when everyone else is talking.
Last month, a group of 30 students, led by Ms. Carriaga, met to find ways to stop the budget cuts. I hadn’t seen the cuts as a big deal, but after speaking with her I saw that I too needed to speak up to protect education.
The budget cuts mean Leuzinger will never be able to grow out of the negative stereotypes that label us a “dumb school” full of students who don’t care.
Solange Rubio, 17, Leuzinger HS (Lawndale)

Our school had a Budget Cut Awareness Day in mid-April, during which all students and staff were asked to wear red, not just to represent our school, but all the schools that are going to be affected.
The Leadership Committee (a group of students at our school) also asked the English teachers to have their students write letters to Gov. Arnold Schwarzenegger protesting the cuts. In my letter, I ranted about how the budget cuts could mean extracurriculars would be cut and we wouldn’t have field trips to places like the California Science Center and those are really important.
“It is a travesty of justice for the governor to take this money away,” our principal, Mr. Weinberg, said. “It shows that he doesn’t care about the students’ education in LAUSD.”
He said he didn’t think teachers would be laid off. But he added that there would be fewer extracurricular activities and field trips.
Just because the state has a deficit doesn’t mean the government has to take away money from something as important as education.
Stacey Avnes, 13, Sherman Oaks Center for Enriched Studies

Many departments at Warren High School are facing hard times. My school’s athletic director told me that my school district has told certain departments that they cannot spend any more money this year.
During a school board meeting in April, the superintendent said that many extracurricular activities could be cut next year, including art, music and athletics, according to the Downey Patriot, our local newspaper. And if a department isn’t eliminated, then it could be reduced.
The Downey Unified school board has held many meetings to address the budget issue and ways to prepare for the worst-case scenario, which could include closing an elementary school, the superintendent said in the same article. When I asked my principal about the budget, he said that at this point none of these cuts are definite.
Britawnya Craft, 17, Warren HS (Downey)