I have always cared about the environment. I pick up my trash, turn off the lights when I leave a room and take short showers. Still, I didn’t know much about global warming until the issue came up in my freshman biology class. My teacher showed us An Inconvenient Truth, the documentary by Al Gore. Watching, I was shocked by the statistics and photos that revealed just how much global warming was already impacting our planet, like the fact that many animals are near extinction and that the rainforests are disappearing. I realized that our environment was in danger and that it was our fault. I knew that I had to do something. I couldn’t fly to the Amazon and tell the loggers to stop cutting down trees or demand that everyone switch to hybrids. I had to start small. Then it hit me: recycling.

I searched for “recycling” on the Internet to find out exactly how it works. I discovered that by recycling, the metal from soda cans can be used to make new soda cans, plastic bottles can be turned into new water bottles and recycled paper can be used to make a variety of paper products such as newsprint and paper towels. Recycling is very efficient. For example, using recycled aluminum requires 95 percent less energy than if that same can was made from new metal, according to an aluminum recycling facts website.

I convinced my family it woudn’t be hard

I decided to present the idea of recycling to my family. I knew that I had to tell them the incentives, which include receiving money for turning in glass, metal and plastic recyclables, and saving the planet, as well as the fact that recycling is easy. One day after my parents returned from work and my whole family was at home, I ushered them into our den. I told them I wanted us to recycle. “It’s easy,” I said, “You just have to put your bottle somewhere else.” They didn’t say anything or ask me any questions. Maybe they thought that I wasn’t serious, I thought, until my father said, “We’ll give it a shot.” 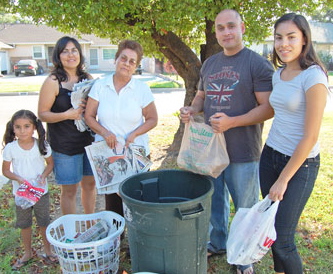 Breanna (far right), along with her parents, grandmother and sister, all pitch in to collect newspapers, bottles and cans to recycle.


The first step was getting containers to hold the plastic bottles, aluminum cans, glass and paper materials. I decided to use only two to simplify things for my family. I went to Target and bought one moderately sized trash bin for $9.99 and one laundry basket for $5.99. The trash bin I assigned for bottles and cans. I placed it in our backyard near the BBQ grill where most of our family events take place, with the intention of collecting the bottles and cans left over from gatherings. I made it even easier for my family by setting aside a plastic grocery bag in the kitchen near our trash can for bottles and cans that I would take outside to the bin. I put the laundry basket, which was for paper, in our kitchen between the wall and dining table.

“Bre, can’t we put this somewhere else?” my mom asked me as she stared at the laundry basket in her kitchen. True, the basket was a bit of an eyesore, but I told her that this was a small sacrifice for the good that she was doing. My father didn’t say anything about the bin near his BBQ grill, but I caught him shoving it out of the way several times.

Who put this can in the trash?

I thought things were going well until a month later when I saw several soda cans and a glass bottle inside the trash can. I reached into the trash can, pulled out the containers and walked through the house asking, “Who do these belong to?” Of course no one claimed them. So I devised a plan. The next day each time someone walked out of the kitchen I checked the trash can. To my surprise, everyone but my grandmother committed the awful crime of throwing everything away. I approached each of them—my aunt, my mom and my dad—and told them that I knew they weren’t recycling and that I wasn’t going to stop pestering them. I knew that I was being annoying (I continued to watch them like a hawk), but that was the only way that my family was actually going to change.

Several weeks passed, and gradually the bins began to fill up with soda cans, water bottles, and old newspapers and magazines. Once the bottle and can bin filled up we dumped the contents into plastic trash bags, loaded them into one of my parents’ cars, and took the recyclables to the recycling station near our local grocery store. We emptied our bags into the recycling structure in the parking lot. We get about $1.50 per pound for aluminum cans, plastic bottles and glass and generally bring home $4 to $5 per trip about twice a month. We take our paper to a recycling center in the City of Industry, about 15 minutes from my house—far enough to cause my parents to complain once in a while about taking me.

Each time I went in my backyard and glanced into the container, I was excited and grateful because my family had helped me with something that I am passionate about. Occasionally, I had to remind my aunt to put her Coca-Cola can into the recycling bin and my dad to place the newspaper into the basket after he was finished reading it.

My grandmother, though, has exceeded my expectations. Although she recycles primarily for the money, she has become the most enthusiastic about it. While on her daily walks she carries a plastic grocery bag. At first, I didn’t understand why she needed it but after seeing her bag bulging with cans, I understood. After her walk she empties her daily treasure into the recycling center near our neighborhood market. Eventually the money adds up because she picks up around four to five cans each day.

After two years, recycling is now routine in our home. The bins fill up every week or two and we take another load to the recycling center. Everyone is constantly on the lookout for recyclables, scavenging their offices or lunch areas at work for bottles and cans. My mom even asked the City of West Covina about getting a recycling bin and discovered that if we used a city bin, our recyclables would be picked up by the city and we could receive a tax deduction. Though I simply made sure that my family placed their “trash” elsewhere, I feel that this small action is making a major difference.


If you liked this story, you should check out L.A. Youth’s other stories about how teens can promote environmentalism … It’s in our hands. Once Se, 16, learned about global warming, he realized that we all can do something about it. (September 2007)