The East Coast is my future home. I know it. I just know it. I don’t know why my parents are even trying to tempt me with the mention of a new Honda Element if I go to one of the UCs. So, to sift through my early decision candidates, I hopped a plane to New York, baby! Some colleges have a thing called "early decision," where students apply a couple months ahead, and are bound to that school unless they get rejected. I visited three schools: New York University, Columbia University, and Wellesley (yes, Hillary Clinton went there). Each session was lead by a charismatic representative who talked about how his or her school is so special. Although the schools I visited do not need any more applicants, I think I have a shot. So I sat through the information sessions where I learned a lot more about school life, academics and how the school runs. Through the campus tours, I really got the feel of what it would be like if I was an actual student at each of the schools. 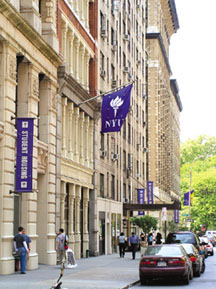 The look of old and new architecture complemented the academic/recreational atmosphere. The hustle and bustle of the streets, the tall buildings, and yellow taxicabs screamed New York. I saw the racial and cultural diversity and I felt the open-mindedness of the area (which is totally awesome!). New York is not known for its friendly people, but I felt I could make friends there.

People who think that this is one, gigantic school are wrong. Students who apply as undergraduates must apply to one of seven schools. I’m applying to the Leonard N. Stern School of Business, one of the top 10 business schools in the country, which is also a graduate school. Yes, the undergraduate school is the graduate school! I couldn’t believe my ears when I first heard about it. What’s the average class size? Thirty. Not 200 or 300, but 30.

Of course, Greenwich Village (an area famous for its concentration of intellectuals and liberals), Washington Square Park (one very awesome park with fountains and everything), NoHo (a funky shopping strip north of Houston Street), and SoHo (an artsy, trendy area south of Houston Street) aren’t bad. The best part about everything is that everyone walks (unlike L.A., where everything seems like it’s 50 miles apart) to these locations. And let’s say you want to see a Broadway show. No problem! Just take the subway right around the corner. 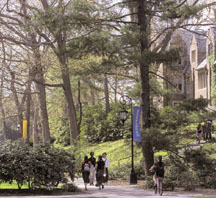 B-E-A-U-T-I-F-U-L. Like the nature-freak that I am, I didn’t care how sultry it was, I couldn’t stop looking at all the green. The red-brick buildings, trees, lawns, benches, blue sky, all accented with the sun were a sight to see. I thought about how I could take advantage of the hilly campus (unlike NYU and Columbia) and take lovely jogs in the mornings. And then, I thought, what about the winters? I can’t jog then, but how beautiful will it be! And the falls, the springs …

Not only that, like my counselor said, once you’re a Wellesley woman, you’re always a Wellesley woman. This means I would have major alumni support, which will be good for getting a job later. Wellesley is also known for growing future women leaders (such as in…business), which is the reason why I visited Wellesley at all. I also like that the class sizes are small like NYU and Columbia.

But I felt kind of isolated from everything. As the school representative said, it’s "a little colony." All I can say about the dorms is that they were clean, practically furnished, and not too small. Unfortunately, Columbia and NYU’s dorms weren’t available, not because they didn’t want to show them to us, but they couldn’t find one that day. And, oh yes, I was and still am kind of iffy about the all-girl school situation. Lastly, I don’t care how "liberal" they say they are, their mannerisms and dress seemed pretty conservative to me. While this campus tour guide wore a white blouse with khakis, other tour guides dressed more interestingly, such as the baggy shorts and T-shirt an NYU tour guide wore. 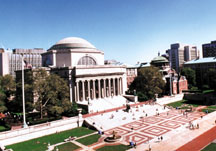 Latin words carved at the top of red-brick buildings, held up by huge, white columns were a common design on Columbia’s campus. The symmetry of the buildings, the focused look on students’ faces, and perfectly cut grass meant only one thing: these people mean business. Even the people weren’t as funky as at NYU. OK, so this school has the whole Ivy League thing going on, but there is nothing that really attracts me to it other than the number of job opportunities.

First of all, Columbia felt separated from the surrounding neighborhood, whereas NYU blended in with Manhattan’s tall, old-yet-modern looking buildings. Its undergraduate students don’t have much to do with its graduate schools, such as its business school (unlike NYU).Of course, it’s a great school with great people all around, but the whole emphasis on its CORE curriculum (a humanities-based program for underclassmen) sort of made my face look like I just drank down cold medicine. I would be required to take specific classes for the first two years, such as Literature Humanities and Logic and Rhetoric. Not that I won’t have to do some of the same things at NYU or Wellesley, but Columbia emphasized this way too much. Who knows, maybe I’ll like The Iliad and would like to have class discussions about how it relates to the world today, but I want a nice meal, not the whole buffet. They have small classes also, so I guess that’s a plus.

*Tuition listed does not include books, room and board, transportation or spending money