I got into animé in fifth grade. I liked animé and manga (Japanese cartoons and comics) because they were so different than the American ones I had seen. Animé characters were drawn with amazing details and big eyes, which made them look more beautiful. Throughout middle school, I joined online clubs for my favorite video games and animés. I liked browsing through art that fans made and finding new mangas to read.

But I thought it was weird that some fans would argue about which characters should be in relationships with other characters. When some animé fans talked about dressing up as a character they liked (cosplaying, which is short for costume playing) at animé conventions, I thought that was beyond geeky. And the pictures I saw in animé magazines of cosplayers in strange or revealing outfits, like guys in frilly dresses and people showing their midriffs, made me even more creeped out by the fans.

So when I got tickets to Anime Expo this summer at the Los Angeles Convention Center in downtown, I was afraid that I’d be surrounded by overly enthusiastic people in bright leotards and bikinis. 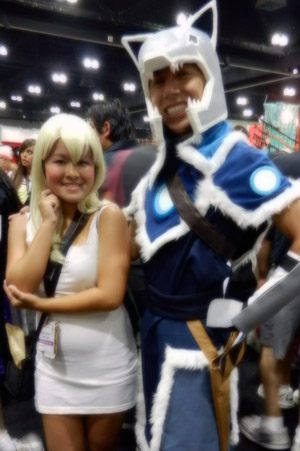 But I changed my mind about cosplayers a week later after seeing pictures of gorgeous cosplayers on an art website called deviantart.com. There was one cosplayer who looked so much like Riku from the video game Kingdom Hearts that it took me 20 minutes to figure out it was a girl dressed as a guy. They were so good at dressing up that it looked like the real character had jumped out of the video game as a human being. I realized that cosplaying was like a form of self-expression and then I wanted to try it too.

For Anime Expo, where lots of people would be cosplaying, I wanted to pick a character who was like me, (friendly, creative and helpful) and wasn’t too hard to make or find clothes for. Ever since playing my favorite video game, Kingdom Hearts II, three years ago, I’ve always been a fan of Namine, a shy artistic girl who tried to help other characters, so I chose her.

Could I transform into this character?

Even though we’re both short and skinny, I worried that Namine’s simple outfit would be difficult to replicate correctly. Namine was blonde and wore a plain white dress and light blue sandals (sometimes she carried a sketchbook). Messing up any detail would throw off my costume.

I read online posts on cosplaying, looked at YouTube tutorials for wig-styling and learned what make-up was best. I looked on deviantart.com for cosplay photos of Namine and noticed the mistakes that others made, like getting sandals in the wrong color or style. I also found out that eBay was the best place to buy the blue contacts and blond wig I needed. Namine also has pale skin, but there was nothing I could do about my tanned skin.

There were many types of sandals on eBay, but almost all of them had too many straps and too much design, or they were the wrong size or too expensive. I never found sandals the right shade of light blue, so I went with white.

Thankfully, Namine’s white dress was simple, so I made it by sewing together two extra-large T-shirts. I sewed for three years as a hobby, so it wasn’t hard. I saved my $7-weekly allowance for six weeks to pay for my costume. When I got nervous about how much I was spending I reminded myself that some costumes cost up to $200, according to what I read online. I was excited to wear my costume, but I was worried that my mom would get freaked out by the cosplayers.

The costumes were so cool 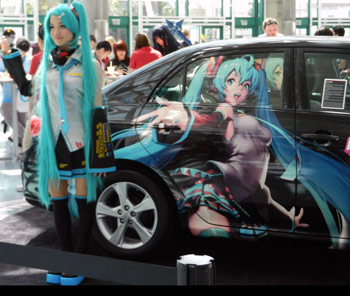 When my mom, sister and I got there, I was excited seeing people wearing costumes in the lines outside the convention center. But I was more amazed when we entered. It seemed like one out of every three people was dressed up. The best part was taking pictures of people dressed up as characters I recognized. I saw people cosplaying in big groups, like a Kingdom Hearts group, with fake weapons and black coats, and people dressed up as characters from Avatar: The Last Airbender. I also saw people going as couples, like Winry and Edward from Full Metal Alchemist. They looked so amazing that I felt sort of embarrassed that my cosplay was so easy to make.

Sometimes I burst out laughing at the funny cosplayers, like a Lady Gaga version of a character from the Yu-Gi-Oh card game or Waldo from the Where’s Waldo books. The shirtless Pokémon and Mario guys were funny, too.

A few times, Kingdom Hearts fans asked to take a picture with me. Everyone was super-friendly. I had heard about fangirls screaming “Kawaii!” (the Japanese word for cute) and jumping on people, but everyone I saw asked first for a picture or a hug. I was happy that I chose a character I liked and every time someone recognized me or called out “Namine!” I would feel proud of my costume.

Even though I went for only one day, Anime Expo changed the way I looked at cosplayers and the animé culture. It was so much fun that when we were in the car going home, my sister and I started making plans to dress up and sell art at the next Anime Expo. One of my friends called me a “weirdo” after I told him that I had dressed up as Namine for Anime Expo, but I’m proud of the cosplayer inside me.