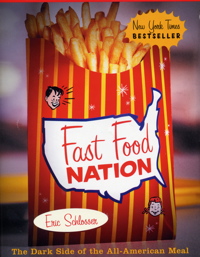 After reading Fast Food Nation by Eric Schlosser, I eat fast food a lot less. I used to go a few times a week because the food tastes good and is cheap. My parents had always said, “Eat more burgers!” because they thought I was too skinny and believed feeding me fast food all the time would make me gain weight.

I had always wanted to read Fast Food Nation because I thought it would be interesting to find out what makes fast food taste so great. But the secrets I read shocked me. I was disgusted that fast-food employees admitted they witnessed food being served that had been dropped on the floor, had spit and urine on it, or had been handled by a worker who just repaired his car engine without washing his hands. Schlosser also describes the gruesome environment of a slaughterhouse he visited in Nebraska. His descriptions are so detailed that I felt as if I was in the slaughterhouse. If you are a meat lover or you live off of McDonald’s burgers, you should skip the next few sentences. He described a worker’s job to shoot cows for eight hours. The slaughterhouse has blood that is ankle deep and the dead cows are shackled and hung in the air before carving.

Schlosser also exposes how fast food lures young children by giving away toys with meals and airing ads on Saturday mornings. I realized that he was totally right because I remember that I used to buy Happy Meals based on what toys they were offering. When McDonald’s restaurants were giving out Beanie Babies as toys, my mom took me everyday so I could collect them all. But this also made me sad. When I was 7, I liked going to this one McDonald’s that had a really cool train display. I realized that the train was another tactic that drew me back to McDonald’s every time.

Fast Food Nation isn’t only a book full of grim secrets that go on behind the counter. It also has interesting stories of how Southern California gave birth to fast food chains because McDonald’s and Carl’s Jr. both started at the same time as rest stops for truckers. That is why their symbols are big and bright to help catch the attention of drivers passing by.

Even though these fast-food chains will probably never disappear, it is best to know what goes into the food we eat because the knowledge will help us make wiser decisions. Now I don’t eat fast food as often. I have been eating more seafood as a substitute to gain weight. But once or twice a month when I’m out with my friends, we’ll eat at a fast-food restaurant. The burger and fries still taste good. But when I’m down to the last bite, I remember what went into making it and I regret eating it. 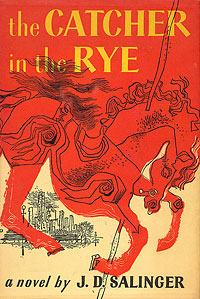 The Catcher in the Rye
By J.D. Salinger

The classic novel The Catcher in the Rye is my favorite book because it is so different from the other books I have read. When I read about how a young man wishes for a purpose in life, I started to think about how to make my own life valuable. I want to cherish every moment and remember all the good things.

The narrator Holden Caulfield goes to a boarding school called Pencey Prep. He loves English but he fails the rest of his subjects. Pencey Prep is a renowned private school, but Holden wishes he could be somewhere else since he assumes every student there is a rich snob. Holden hates almost everybody he encounters and thinks they are all a bunch of fakes. Only a few people seem to catch his genuine interest.

I have so much in common with Holden. I loved the way he overanalyzes people’s behavior, especially if they have annoying habits like misplacing things. It isn’t fair for Holden to assume things about people, but I do that too. If girls say “like” all the time, I tend to think they are “valley girls” or obsessed with their looks. I know that sometimes I can be wrong about my judgments, but they come so easily.

I enjoyed Holden’s humor, such as: “I laughed. And I have one of these very loud, stupid laughs. I mean if I ever sat behind myself in a movie or something, I’d probably lean over and tell myself to please shut up.” It was the first time I read an old book where a character talks like a real teen.

Holden is kicked out of school, mostly because of his poor grades. He is afraid to tell his parents so he finds a way to escape the inevitable. Holden leaves Pencey Prep and goes to New York to find “real” people and seek better experiences. New York in the 1940s is depicted as lively. Holden visits a nightclub to loosen up and have fun. If I could, I would love to travel around New York and see places I have only heard of.

My favorite part is when Holden spends time with Phoebe, his younger sister. He sneaks into his parents’ apartment near Central Park. Holden gives Phoebe his most cherished possession, a red hunting hat. Despite his rough exterior, he has a sympathetic inner core.

Even though The Catcher in the Rye was written about 60 years ago, the circumstances and the drama are the same as what all teenagers go through today. Holden’s real journey is his struggle to find himself. He wants to find what is worthwhile, anything that gives him purpose. He also does not want to be a grownup, because that would mean he would have to be more responsible. While he rebels against having to do things he does not want to do, like being expected to act mature for his age, Holden tries to be the “catcher in the rye.” He imagines children playing a game in a field of rye near a cliff and it is his job to protect them by catching anyone who goes too close to the edge. This job would make him truly happy. I also don’t want to grow up because I miss being a kid. Growing up is like leaving a piece of yourself behind. 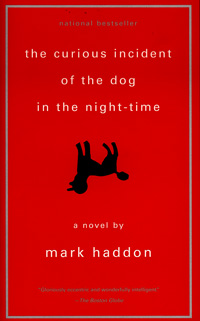 The Curious Incident of the Dog in the Night-Time is a novel about a 15-year old autistic boy named Christopher Boone. After discovering the dead body of Wellington, his neighbor’s poodle, Christopher decides to investigate the mystery behind the dog’s death. He records his findings, deciding that he will create a “murder mystery novel” of the situation. But like any murder mystery novel, nothing is as simple as it seems. Christopher encounters many difficult situations throughout the course of his investigation because of his disability. He repeatedly mentions his admiration of Sherlock Holmes, which gave me an understanding as to why he continued to investigate Wellington’s murder even after his father made him promise not to.

Christopher’s story seemed so true and heartfelt and that made the novel an easy and entertaining read. The author, Mark Haddon, had me wanting to keep reading to find out what Christopher would get himself into next.

Haddon demonstrates how Christopher’s disability affects how he goes about solving the mystery. Christopher has Asperger’s syndrome, or high-functioning autism. He has difficulties with social interaction and demonstrating empathy, but has a remarkable visual memory and ability to understand complex math.

This book was required reading at my school, but it became more than something I had to read. Haddon showed how profoundly these disabilities affect the lives of not only the children diagnosed with them, but also those around them. Christopher unknowingly affects people in overwhelming ways, all while simply looking out for himself.

The novel feels more real because it’s written from Christopher’s point of view. For example, when Christopher explains that when he “was little [he] didn’t understand about other people having minds,” it gives the impression that he’s a real person. Also, the chapters are numbered using prime numbers starting at two and ending at 233. Sometimes Christopher’s thoughts digress from the narrative and are about seemingly unconnected subjects like math, puzzles and observations or descriptions of things. The entire three-page appendix is an explanation of a complicated math equation, which was referred to in an earlier part of the novel. This adds to how well readers can connect with Christopher’s character because it really seems like he wrote it.