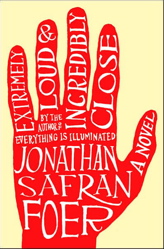 Extremely Loud and Incredibly Close by Jonathan Safran Foer is about a 9-year-old boy named Oskar Schell whose father died in the September 11th attacks in New York. After the attacks, Oskar often walked around his father’s bedroom to remember what the room looked like before everything was packed up in boxes. One day, he accidentally knocks over a vase on the top of his father’s closet and finds a key inside it. Oskar tries to find closure as he goes on a quest to find the lock that fits the key.

When my teacher first recommended this book, I thought it was just a sad book about 9/11, but it has an inspiring ending and a happy outlook on remembering those who have passed away. I think Foer did an amazing job tackling this topic because he didn’t hold back, which showed me real human emotions. For example, Foer wrote a whole page dedicated to Oskar wondering whether he would have jumped from the World Trade Center building or ran down the stairs burning. Now I understand that sometimes when people grieve someone’s death, they often wonder what they would do in that situation.

I loved reading this book because Foer’s writing style is captivating and full of hidden clues. Foer also includes pictures that serve as clues. The first page was a picture of a doorknob, which I later learned was significant in understanding part of the story. I also loved the way Foer designed his pages. For example, Foer took up 20 pages with just one sentence on each. On a couple of pages, he filled the pages with numbers, but you’ll have to read the book if you want to know why.

This book was a fast read because I never could predict what would happen next. I also loved Foer’s message at the end. Oskar, who has been on this "quest" for two years, finally learns that finding clues about his father hasn’t helped him cope with the loss of his father. He eventually finds a beautiful way to remember his father, which was represented by the pictures on the last couple pages of the book.

I think that this book is relatable because it captures emotions that people deal with every day. Throughout the book, Oskar feels disappointed, abandoned, confused and useless, but also happy, successful and inspired. Because Oskar narrates a lot of the chapters, the readers also share the emotions Oskar is going through and get to see how he deals with them. Not only did I let go a lot of my anger and frustrations about school and stressing out while reading about Oskar venting his anger, I also felt inspired when Oskar found a way to cope with his father’s loss.

I think when people read this book, they’ll root for Oskar and when he succeeds, the readers will also feel his success.