Many people struggle to accomplish things they want in life. Some have smooth roads through life while others suffer along bumpy roads. It really depends on the decisions people make and their goals in life. 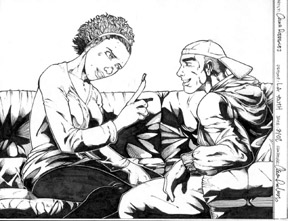 After reading Langston Hughes’s poem "Mother To Son," I realized that the advice people give is really important. This is a wonderful poem that opened my eyes and mind to a world filled with competition.

In this poem, a mother gives her son advice. She tells him that her life has not been easy. She has been through everything that he can imagine, but she never gave up. She compares her life to a staircase. When she says, "Don’t you set down on the steps," she means don’t give up. She continues her stair comparison and says, "Cause you find it’s kinder hard." By saying that, she means that if her son gives up it’s just going to get harder on him and not anybody else.

The mother is saying that she has not had a smooth life. She says, "Life for me ain’t been no crystal stair," and means that her life has not been as smooth as a set of crystal stairs. It has had its up and downs.

I think the mother’s advice is inspirational and motivational. This poem is realistic in every aspect of life and has really inspired me to stick with my goals, no matter how hard they are to accomplish. 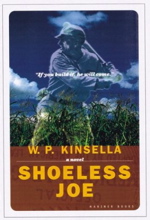 Shoeless Joe, by W.P. Kinsella, is a page-turning, inspirational story that many might not relate to at first. But in the end, it teaches valuable lessons of belief and hope.

In the book, the mysterious voice of an Iowa baseball announcer tells Ray Kinsella to carve a baseball field in his cornfield in honor of baseball legend Shoeless Joe Jackson.

But this book isn’t so much about baseball as it is dreams, magic, life and what is quintessentially American. Kinsella’s character deals with many real life factors as well. He loses his agricultural business and then is forced to give up his field and home, because he can’t pay for the land. Through his journey, Kinsella reconciles with feuding family members and goes back in time to heal the heart of a writer who made a major impact on him. These events happen along the way to add up to the novel’s two major goals: to resurrect spirits of baseball legends and for Kinsella to reunite with his father who played baseball with the professionals.

Father and son reunite at the end of the book. Apparently the father died when his son was young. But this second chance to meet allowed him to be with the father whom he vaguely remembered. I think this is heart warming.

It’s said that behind fiction is a hint of truth and I absolutely believe this. What’s best about this book is that it’s uplifting and I didn’t realize it until I understood the book. This book reached and touched me in a significant way.

I’ve never read a book that grabbed my attention more than Go Ask Alice. It was so hard to put down that I read it in one day. In fact, I felt mad when I was close to finishing the book, because I didn’t want it to end.

It’s about a girl named Alice who had problems like any teen, but she tried to solve her problems by doing drugs. Alice made bad choices when it came to handling her life, and those decisions led to her death. This book is one of my favorites, because it showed me how a girl my age died.

After I finished the book, I was sad. It was upsetting to find that Alice died of an overdose. I think whatever choices you make right now follow you throughout your future.

This book helped me recognize the wrong paths of life. I learned how bad Alice ended up and I don’t want that for my future.