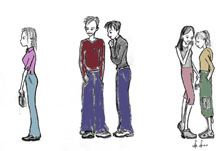 Step out Baywatch babes, your days in the sun are over, because now it’s a booty takeover. Butts are everywhere. From old songs like Sir Mix-a-lot’s "Baby Got Back" to recent hits like Sisqo’s "Thong Song" to the commotion about the size of Jennifer Lopez’s derriere.

But why butts? I went around school looking for answers. At first, I was afraid that when I went up to guys, they’d think I was trying to find an excuse to talk to them or that I was trying to fish for compliments. It ended up being easier than I thought it would be. My classmates were more than happy to talk about butts. Some even drew a nice butt in the air with their hands to show what they were talking about. Many admitted that it was only human to find butts attractive.

"It’s natural instinct," said Danny Castellanos, 15. "It’s the only thing you can look at when they’re walking."

But not just any butt will do. Guys definitely have their preferences. Just like they’d go for brunettes or red heads, guys will only go for certain types of butts.

And if some girls are considered arm pieces, then their butts are trophies. There’s always that type of guy who needs a pretty girlfriend to boost his ego. Butts are no exception. Guys know that they will get props for their girlfriends’ nice booties.

Although guys were very open to me about butts, they don’t always blurt out lines to a girl’s face. They know better than to be disrespectful like that. They are aware that girls might get offended. But that doesn’t stop them from talking among themselves about cute butts.

"Damn your butt’s booty-licious," is a line my close friend Fernando Garcia, 17, says when he refers to a girl’s nice butt. He won’t say it directly to just any girl. He’ll say the line to the girls in our circle of friends, because he knows we won’t get offended by it. But there’s some truth to the line, because he wouldn’t say it if he didn’t mean it.

Most guys use lines similar to Fernando’s to tell a girl how much they truthfully like her butt.

"Girls like it. We like to make girls smile," said Fernando. "We want to get on the good side, which is the back side."

Alicia Darden, 17, agrees that when friends compliment her butt, she doesn’t feel violated, because she knows that they are just joking around. In fact, most girls I spoke to agreed that they do like getting their butts complimented. However, if strangers make too much of a fuss, many girls feel offended, because the comments are intrusive.

"If a stranger says ‘look at that junk in the trunk,’ then I feel violated," said Stephanie Varlotta, 16.

Girls are no exception to the butt rule. They look at guys the same way—from behind. But they don’t want to directly tell guys that.

"I don’t compliment guys’ butts to their faces but if I’m with my friends we will talk about a cute guy’s butt," said Jillian Ballard, 16.

At one time, women didn’t want big butts because it was a sign of being fat. But things have changed. Since butts are such a big deal, many girls are happy to have a butt. It’s in. Even girls compliment each other on how great their butts look in jeans.

Girls who don’t have much for breasts, can at least have a butt. It’s worse NOT to have a nice butt.