My house is boring. My mom is always at work and my sisters are never around so I have nothing to do. I only stay home on Sundays when I do my homework, clean or paint. But since I live in Compton, I don’t feel safe in my neighborhood. There are fast-food restaurants and stores but nothing fun. The train lets me escape and explore.

I have been taking the train for five years. I’ve learned that it’s fast and convenient. I live about two miles from the Blue Line Imperial station. With my $24 monthly student pass, I get unlimited access to all the Metro buses and trains. I like taking the train because it gives me freedom. My mom is not able to drive me places since she works so much. During the week, I take the train to P.E.P. L.A., an HIV/AIDS peer education program in West Hollywood, and to a community center in Koreatown to volunteer and get SAT prep.

But I really have fun on the weekends. My favorite place to go is downtown. I take the train to Macy’s Plaza in front of the 7th Street station to do some shopping at Borders or Victoria’s Secret, or get something to eat at the food court. With 25 cents, you can take the DASH bus from the station to get to the Fashion District. Since I like making accessories like messenger bags and earrings, I love going there because of all the deals on jewelry supplies and fabrics. I also go to the American Apparel factory because the clothes are cheaper and the store is huge. The downtown library is three blocks away from the 7th Street station. The library is so huge you can get lost, in a good way.

I take the train to the Museum of Contemporary Art with friends the first Sunday of every month when they have family days since we can get in for free. We tour the museum and get to do an art project at the end. I like looking at the art because they have a lot of weird stuff, like a mirror that was cracked in the middle. I was thinking, “I could make that. Why is this here? How is this special?”

The cool thing about the train is that it connects to other train lines, which lets you see different parts of the city. The Gold Line runs from Union Station northeast to Pasadena and now east to East L.A. The Red Line goes from downtown to Hollywood. The Purple goes from Union Station to Koreatown and the Green goes from Norwalk to several beaches. When I don’t know how to get somewhere, I go to mta.net, type in my starting and end point and get times and routes. I hardly ever get lost. 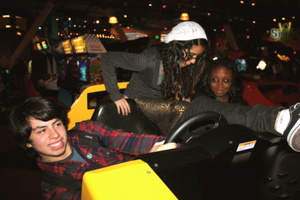 Edgar Mejia, 16, of Venice HS, Jacky Garcia, 17, Lynwood HS and Carla Love, 17, of Ouchi HS, enjoy goofing off in the arcade even more than playing the games, which they didn't because they were saving money. Photo by Luisa Mendoza, 16, Lynwood HS

Recently, my friends and I took a trip to Long Beach to hang out. We hardly spent any money and still managed to have fun. We rode the ferris wheel at The Pike, which was only two bucks, ate at Sharky’s, a Mexican restaurant, went to Gameworks and walked down the boardwalk. These were my friends from middle school and I hardly get to see them now since we all go to different schools. We had a good time catching up, laughing at the guy skating on ice dressed up as a giant shrimp, rolling down a hill, and our usual random talks.

The train lets me see Los Angeles in my own way because I get to go to places I want to. Long Beach has attractions, restaurants and movies. Downtown has shopping, art and community events. People from all over Los Angeles ride the train. They’re friendly and you get to see people from different backgrounds. Riding the train is one of my favorite things to do.

Go to mta.net for schedules and routes.